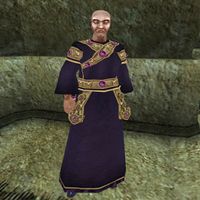 Trebonius Artorius is an Imperial battlemage, and the Arch-Mage of the Mages Guild in Vvardenfell. He is generally regarded as somewhat of a joke by the rest of the guild; while he is an outstanding Battlemage, his ability to lead the guild is somewhat lacking. This is even more apparent when one encounters the strange quests he offers (Mystery of the Dwarves and Kill the Telvanni Councilors) as well as a certain quest from Ranis Athrys about a spy in the Mages Guild. He's also the man to see if you've been expelled from the Mages Guild. Talk to him, and he'll state that you need to "reflect on what you have done". Wait about 7-14 days, then he will let you come back into the Mages Guild.

His unique staff has some nasty enchantments on it. He wears an extravagant robe with matching belt and shoes as well as the necromancer's amulet. He also carries a unique potion of Cure Common Disease, five Exclusive Restore Magicka potions, an Exclusive Rising Force potion, and a Cheap Fortify Health potion.

He has gained a colorful reputation among his fellow guild members, with many of them commenting on his unique activity as guild leader.