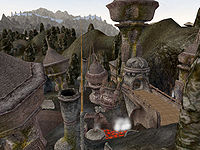 Mzuleft is a large Dwemer ruin located to the southwest of Dagon Fel.

The ruin is marked on your world map as Mzuleft Ruin. Orcs have taken up residence in this ruin and will attack you on sight. Edwinna of the Mages Guild will ask you to find some Dwemer Scarab Plans in this ruin. You'll find the plans on a shelf in the first room to the right, along with a Key to Mzuleft and some dwemer clutter on shelves. As you enter this room, Mugdul will be on your immediate left. The door to the northwest is locked with Orcs Lagakh and Glasha, along with The Egg of Time book, many Rusty Dwemer Cogs and a trapped chest with leveled Dwarven Items.

Heading left/south-east from the entrance, Durgat and Burgat can be found in the room at the end of the hallway. There are crates containing random clutter and kegs with various ingredients.

The second floor is accessed via a stairway behind a locked door back along the hallway. Orcs Khadba and Duluk are encountered on the top floor and a Rusty Dwemer Chest that holds random Dwarven Items. 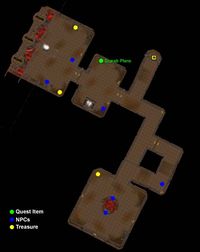