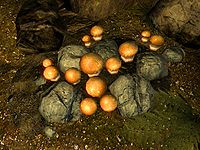 Imp Stools are short and rounded orange-capped, yellow, or golden-brown mushrooms.[1] [2] They grow in caves, and outside in the shade of trees or rocks. They grow in groups of ten or more.[3] They can also be found on the bodies of Shroom Beetles.[1] 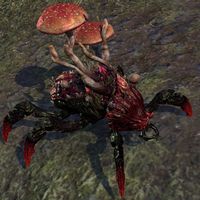 Ink-Cap Mushrooms thrive on decaying swamp life in the Bitter Coast Region of Vvardenfell, and can be found growing on rocks, trees, and even Shroom Beetles. 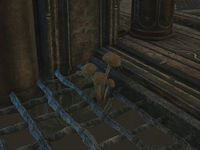 Ironstalk Mushrooms are transient fungi that were brought to the Clockwork City by outsiders. They had adapted to the realm's synthetic and inhospitable metallic soil[4] and can be found in the Everwound Wellspring[5] and the Halls of Regulation.[6] If the mushrooms undergo an extensive pickling process, they can be made edible.[7] 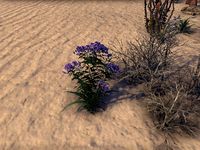 A low-lying plant with purple flowers whose fibers can be spun into thread and used to make Ironthread clothing. 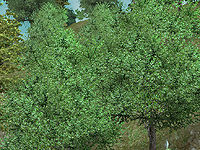 The Ironwood is a tree that grows deep in the forests of Skyrim. They are known for their durability, which is as hard as iron, hence the name. The rare black variant is extremely rare and is said to produce the very succulent Ironwood nut. It is believed that anyone who can break open the nut will enhance their strength.[8] There is also an orange variant, found in Tamriel's warmer places.[9] In the mid-Second Era, the Order of the New Moon use dark ironwood to craft their staves.[10]