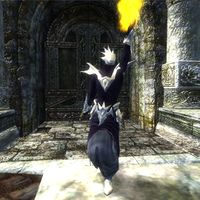 A Priest of Order

The Priests of Order are one of the three Forces of Order, the other two being Knights of Order and Jyggalag.

Citizens that have betrayed and left Sheogorath to join Jyggalag become Priests of Order. A magical connection exists between priests and the obelisks under their control: priests will reactivate deactivated obelisks, and active obelisks will resurrect priests shortly after they fall. Furthermore, anybody trying to loot a priest with an active obelisk will instead receive an electric shock. The only way to break the connection is to place three Hearts of Order into the obelisk, causing it to overload, then kill the priest before he can repair the damage.

If you sneak up on a Priest of Order, engage with one just after they are reanimated (during their prayer motion), or use a charm spell of 100, they will say "Order will rule this realm. It is foreordained.", "I prepare the way for my Lord Jyggalag.", or "Madness always yields to the march of Order!" Knights of Order will also use these phrases if similarly manipulated, due to a bug.

Some priests carry a leveled weapon: Levels 1-5 will have a generic dagger or sword, while Levels 6 and up will possess a crystal staff. They may also carry soul gems, gems, potions, scrolls, enchanted jewelry, and Hearts of Order. Unlike Knights, Priests' robes and hood can be looted from their corpses. They are capable of casting a major Alteration spell (Burden, Fire, Frost or Shock Shield or Shield), a major Restoration spell (Restore Health, Absorb Fatigue, Health or Skill), a major Illusion spel (Chameleon, Invisibility or Silence), and a major Mysticism spell (Dispel (self and target), Spell Absorption or Reflection). In addition, some Priests have additional leveled list of major/minor Restoration spells and major Elemental Damage/Damage Health spells. They also have a very cheap unique spell that summons an ebony dagger for 60 seconds, rather than the usual Daedric version. Unlike Knights of Order, priests do not possess natural resistances to Magic and Poison.