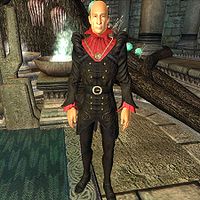 Haskill in the Palace of Sheogorath

Haskill is a Breton and a Chamberlain of Sheogorath. He is the first to greet you when you travel to the Shivering Isles. It is possible to summon him with a lesser power acquired after speaking to Sheogorath for the second time. He generally has some useful information regarding quests during the main quest line. He is also un-attackable - weapons and spells pass straight through him. He wears a unique suit called "Haskill's Suit", which can never be acquired by the player since Haskill is invincible and the clothing is not playable anyway.

He knows a powerful healing spell unique to him that restores 300 points of health.

After completing the quest Baiting the Trap, you are given the ability to summon Haskill. During this time, he has many interesting things to say, if you keep summoning him.