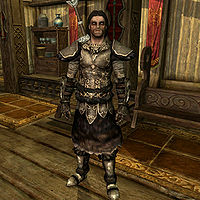 Vilkas is a Nord warrior and a werewolf, usually found within Jorrvaskr in Whiterun. He is a member of the Circle, a faction within the Companions, alongside his twin brother Farkas. Vilkas is a master trainer in the Two-handed skill. When the Companions questline is complete, he becomes a potential follower and marriage candidate.

Vilkas's outfit consists of a set of wolf armor, with matching gauntlets and boots, but minus the helmet. He also carries around a banded iron shield and his sword. He is usually found around Jorrvaskr. However, if he becomes recruited as a Blade, he will then reside in Sky Haven Temple.

If you ask who the Companions are, he will answer: "You'll hear some of the brighter faces around here talk about honor and glory. I've got nothing against it, but for me, the promise of coin is what feeds my blade. Wherever someone in Skyrim doesn't feel up to defending their own honor, we'll take up their burden." If you ask as to why he joined, he will elaborate: "To hear Farkas tell it, our father raised us here as happy pups, running around biting knees. I love my brother, but his brains are not his strong suit. We were brought here by Jergen. Whether he was our father or not, I don't care. He left to fight in the Great War and never came back. So he's not my problem anymore. We've been here as long as either of us can remember, though. So try to show some respect."

After joining the Companions, if you ask what it means to be a Companion, he will explain: "There's been a group called the Companions for over 4000 years. It's been many different things in that time. A conquering army. Ruthless mercenaries. A band of drunken louts. And the esteemed company you see before you. But there's always been a kind of honor to it. We don't deal in politics or underhanded sneaking. We try to uphold the legacy of Ysgramor. To bear his good name such that it never be forgotten, and always be spoken with reverence." Also confronting him on where he stands on the current war, he will blatantly tell you: "There are always good reasons to fight. I just wish this war had them. Who cares who worships what dead god? Give me something to make me draw my sword." If you choose to ask his opinion on being a werewolf before Blood's Honor, Vilkas will be quick to dismiss your question: "I don't know what you're talking about. But if I were you, I'd hold my tongue." However, if you ask the same question after becoming initiated within the ranks of the Circle, he will answer very differently: "I've enjoyed the boons that come with beastblood. Just like every member of the Circle. Kodlak is right, though. We've given a piece of our souls for this power. I know my mythic histories. Bargains like that lead to ruin. This is a curse that was laid upon us. That much is clear."

When you first speak with Kodlak Whitemane about joining the Companions, Vilkas can be found in Kodlak's quarters in the living quarters having a conversation with Kodlak:

Vilkas: "But I still hear the call of the blood."
Kodlak: "We all do. It is our burden to bear. But we can overcome."
Vilkas: "You have my brother and I, obviously. But I don't know if the rest will go along quite so easily."
Kodlak: "Leave that to me." 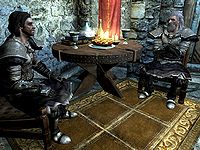 "But I still hear the call of the blood."

When you approach Kodlak to express your interest in joining the Companions, Vilkas will interrupt the conversation while Kodlak is considering your offer, showing that he disagrees with Kodlak allowing you to join:

Vilkas: "Master, you're not truly considering accepting him/her?"
Kodlak: "I am nobody's master, Vilkas. And last I checked, we had some empty beds in Jorrvaskr for those with a fire burning in their hearts."
Vilkas: "Apologies. But perhaps this isn't the time. I've never even heard of this outsider."
Kodlak: "Sometimes the famous come to us. Sometimes men and women come to us to seek their fame. It makes no difference. What matters is their heart."
Vilkas: "And their arm."

Kodlak will question your skill in combat. Regardless of what you say to him he will direct you to follow Vilkas out into the courtyard for training practice. If you ask him if he's supposed to train you before you reach the yard, Vilkas will tell you: "Not here. Out in the yard. Come on." Once you've exited out into the courtyard, Vilkas will then explain: "The old man said to have a look at you, so let's do this. Just have a few swings at me so I can see your form. Don't worry, I can take it." He will make various comments depending on what you do:

Afterwards, he will then order you around: "You might just make it. But for now, you're still a whelp to us, new blood. So you do what we tell you. Here's my sword. Go take it up to Eorlund to have it sharpened. And be careful, it's probably worth more than you are."

After Kodlak has been slain by members of the Silver Hand upon your return back to Jorrvaskr, Vilkas is looking to seek revenge for his death and asks you to accompany him to Driftshade Refuge and to retrieve the fragments of Wuuthrad. He will say either: "We're going to make them pay." "Those bastards will regret raising their weapons against Jorrvaskr." or "Let's get back to Jorrvaskr. We'll want to pay our respects to Kodlak's spirit." Once you return from Driftshade Refuge, Vilkas will tell you: "We did well today, Shield-Brother/Shield-Sister." and continue to inform you about Kodlak's funeral: "The others have probably prepared Kodlak's funeral by now. Come up to the Skyforge to pay your respects."

After Kodlak's funeral, the rest of the members of the Circle will gather in the Underforge. Upon arriving, a conversation between them will occur, discussing Kodlak's passing: 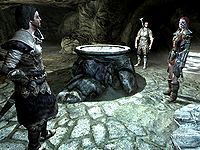 "The old man had one wish before he died. And he didn't get it. It's as simple as that."

Vilkas "The old man had one wish before he died. And he didn't get it. It's as simple as that."
Aela: "Being moon-born is not so much of a curse as you might think, Vilkas."
Vilkas: "That's fine for you. But he wanted to be clean. He wanted to meet Ysgramor and know the glories of Sovngarde. But all that was taken from him."
Aela: "And you avenged him."
Farkas: "Kodlak did not care for vengeance."
Vilkas: "No, Farkas, he didn't. And that's not what this is about. We should be honoring Kodlak, no matter our own thoughts on the blood."
Aela: "You're right. It's what he wanted, and he deserved to have it."
Vilkas: "Kodlak used to speak of a way to cleanse his soul, even in death. You know the legends of the Tomb of Ysgramor."
Aela: "There the souls of the Harbingers will heed the call of northern steel. We can't even enter the tomb without Wuuthrad, and it's in pieces, like it has been for a thousand years."

At this point, Eorlund will enter, carrying the legendary Wuuthrad.

Eorlund: "And dragons were just stories. And the elves once ruled Skyrim. Just because something is, doesn't mean it must be. The blade is a weapon. A tool. Tools are meant to be broken. And repaired."
Vilkas: "Is that? Did you repair the blade?"
Eorlund: "This is the first time I've had all the pieces, thanks to our Shield-Brother/Sister here. "The flames of a hero can reforge the shattered." The flames of Kodlak shall fuel the rebirth of Wuuthrad. And now it will take you to meet him once more. The rest of you, prepare to journey to the Tomb of Ysgramor. For Kodlak. As the one who bore the fragments, I think you should be the one to carry Wuuthrad into battle." 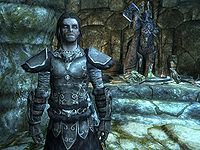 "Kodlak was right. I let vengeance rule my heart."

You are now directed to meet the rest of the members at Ysgramor's Tomb. Upon your arrival, asking if this is the tomb, he will elaborate: "This is the resting place of Ysgramor. And his most trusted generals. You should be cautious." Asking him specifically what he meant, he will continue: "The original Companions. Their finest warriors rest with Ysgramor. You'll have to prove yourselves to them. It's not that you're intruding. I'd wager they've actually expected us. They just want to be sure that you're worthy. Be ready for an honorable battle." Inquiring as to how to get inside, Vilkas will tell you: "Return Wuuthrad to Ysgramor. It should open the way." Also asking him if he's not coming, he will sadly admit: "Kodlak was right. I let vengeance rule my heart. I regret nothing of what we did at Driftshade. But I can't go any further with my mind fogged or my heart grieved." Once you've cleansed Kodlak's spirit and become the Harbinger of the Companions, you are able to cleanse Vilkas' spirit during the quest Purity.