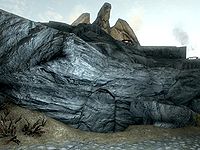 The secret entrance to the Underforge

The Underforge is an ancient chamber hidden underneath the Skyforge used as a ritual chamber by the Circle of the Companions. 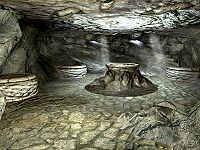 Like the Skyforge, its origins are unknown, and it was there before Jorrvaskr was built and Whiterun was founded.

The first time you visit the Underforge is during The Silver Hand quest, when you discover the secret of the senior members of the Companions and are invited to join the Circle. Its members describe it as an ancient place attuned to the moon and Hircine. A font in the center of the room is a central part of the blood ritual and is filled with the blood of the initiate's "forebear". After drinking the blood, the initiate will begin the transformation into a werewolf. There are three altars to Hircine around the room. These are initially empty, but after completing Glory of the Dead, Aela the Huntress will give you quests to travel with her to seek these totems out, if you choose to remain a werewolf. The Underforge also contains a secret exit out to Skyrim that bypasses all the city guards and citizens, allowing for safe travel while transformed.

The exit brings you out a short distance north of Battle-Born Farm, with a quicksilver ore vein to the left and a corundum ore vein above it. This exit cannot be used to re-enter Whiterun due to a ledge that you have to drop down to exit.

The totems are described in detail in the tome The Totems of Hircine. By praying to these totems you will be given a unique ability that can be activated while in beast form.