For the book, see Touching the Sky (book). 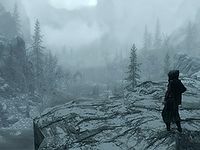 Serana gazing out over the Forgotten Vale

After learning the location of Auriel's Bow, travel to Darkfall Cave. The cave is very dark, so you may wish to light your way using torches, the Vampire's Sight ability, or light spells. Follow the path, past a frostbite spider until you come to a bridge and what seems like a dead end. There are a few moonstone rocks, and a pickaxe here as well.

Once you try to cross back over the bridge, you will be forced, by either a rock trap or the bridge collapsing, into a very fast moving underground river that sends you downstream. Try to keep your head above the water, unless you have a waterbreathing ability. Eventually, you'll be thrown out of the current, and attacked by a few frostbite spiders. Continue along the path, until you reach a small camp. If you have Serana, she'll make a remark about how horrible the sight is. At this point, you have a few options. There are two visible paths. The first one, right behind the dead Breton, will lead you on a winding path, straight to a room with two trolls. The other path will take you through an area with spiderwebs blocking your way; destroy them to reveal a giant frostbite spider that may be fighting with a vampire. Eventually, you will find a large open area containing two trolls. Alternatively, you may skip the trolls' room by pulling the chain hidden behind the dead Breton's lean-to and taking the passage it reveals.

At the other end of the large cave you will meet Knight-Paladin Gelebor, one of the last two Snow Elves. He tells you that in exchange for his help obtaining Auriel's Bow, you have to slay his brother, Vyrthur, who was corrupted by Falmer, whom he calls "The Betrayed". Vyrthur is hiding in the Inner Sanctum of the Forgotten Vale, a gigantic outdoor elven ruin with Ayleid-like architecture. In order to make your way there you must fill a jug, the Initiate's Ewer, with water from five wayshrines: the Wayshrines of Illumination, Learning, Radiance, Resolution, and Sight.

The first wayshrine, the Wayshrine of Illumination, is through the portal Gelebor opens. The Portal appears in the back of the shrine-like building that Gelebor raises from the ground - it might be invisible, with no Quest Marker pointing to it, but walking into the shrine, and up to the back of the wall, you will be able to activate the Portal none the less (check Notes for more info). It leads you to Darkfall Passage which you will find it at the end of a long, dark trek through Darkfall Passage. You will along the winding underground trek encounter several leveled falmer and chaurus. Be sure to destroy any chaurus cocoons you come across before they have a chance to hatch. To get to the wayshrine, just follow the winding path, illuminated by tube worms, which look like odd pink flowers that retract into their tubes when you come near - they also emit a small amount of pink light to guide the way. The Shrine is tended to by Prelate Sidanyis. 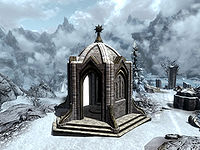 The Wayshrine of Resolution

The second wayshrine, the Wayshrine of Sight, can be found soon after emerging from Darkfall Passage into the Forgotten Vale and is tended to by Prelate Athring. It is to the north of the path that climbs up out of the entry vale through the arches, and west/northwest of the Forgotten Vale Cave.

The third, the Wayshrine of Learning, tended to by Prelate Celegriath, will be found by returning to the arches, and continuing west up the stairs, passing through a narrow pass inhabited by frostbite spiders, then dropping down to a narrow river valley. The wayshrine is located just downstream from where the path reaches the river bank. After crossing the river below the third wayshrine, zig zag southwest and northwest up the steep path to a large, frozen lake. Beware the two dragons, Naaslaarum and Voslaarum, that will attack you as you cross the frozen lake (if you have killed the dragon in Dragon Rising).

The fourth wayshrine, the Wayshrine of Resolution, is above the northwest bank of the lake and tended to by Prelate Nirilor. Don't forget to pick up a Shout from the large rock jutting out from the middle of the frozen lake south of this wayshrine. Two dragons will break through the ice when you get close to the rock.

The fifth and final wayshrine, the Wayshrine of Radiance, is north of the Wayshrine of Resolution. It can only be reached after a long, arduous trek through Forgotten Vale and Glacial Crevice. Before entering the Glacial Crevice, take a right down the last bone bridge. Keep going and you will come to a small Falmer hut which houses Unknown Book, Vol. III, "FAIRE AGARWEN LIFE RECORD" (See Forgotten Vale Books Quest). Go back and enter the entrance to Glacial Crevice. The initial path through Forgotten Vale takes you through a series of Falmer dwellings nestled in among the cliffs above the river, and connected by a series of rope bridges and stone ramps. Fight your way through the leveled Falmer that call this area home, then enter Glacial Crevice. This area consists of a series of glacial chambers with icy ledges and rope bridges that ascend among a scattering of Falmer tents. Dispose of the many leveled Falmer that occupy this zone until you once again emerge out to Forgotten Vale. This final part of the Vale consists of a confusing maze of Falmer tents and platforms crowded within a series of narrow, twisting canyons. Pick up the Unknown Book Vol. IV from a hut in the second village, before the wayshrine. The ascent to the Wayshrine of Radiance, tended to by Prelate Edhelbor, is a tunnel containing several Quicksilver Ore veins found on the canyon floor at the very end of the Falmer village. 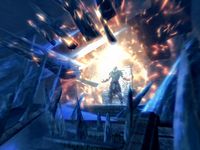 Down the path from the Wayshrine of Radiance is the Inner Sanctum. Upon entering, you will find many frozen Falmer and chaurus in the entry chamber. Many of the Falmer hold items that can be looted, which may cause one or more of them to break out of their icy state and attack. Place the Initiate's Ewer on the pedestals to open gates as you make your way to Vyrthur's chamber. During battle, he causes the ceiling to periodically collapse as he awakens several waves of Falmer and chaurus to attack. When all frozen enemies are gone, he will collapse the rest of the roof on you and a cut scene will commence. You will wake up with Serana telling you to get up and get on the balcony. You will be able to move during this scene but cannot take any other action during the dialogue sequence until Serana's confrontation with Vyrthur is completed. After she releases him, you will be free to act and it is up to you to finish him off. The temple balcony is above the frozen lake near the Shrine of Resolution, so if you blast him off the balcony but want to loot his body for some ancient Falmer armor, then look down on the lake below. When Vyrthur is dead, a wayshrine will appear and Gelebor will come through. He will be surprised at the real reason for Vyrthur's actions, and thank you, telling you that you deserve to carry Auriel's Bow. He will also bless some Sunhallowed arrows for you if you ask, and remain there if you wish to come back for more at any time.

Note: Nearly all of the bugs mentioned below occur because Gelebor, Serana, or Vyrthur have uncompleted scripts running. Be sure to allow any dialogue they are speaking to complete before taking further action. Also, make sure that the scripted actions with the Initiate's Ewer and the Wayshrines have completed before going on to the next wayshrine.