The first objective in this quest is to find a Moth Priest's draw knife. As you can see on your map, the place to do this is the Ancestor Glade. The closest place to fast travel to is Falkreath. Take the eastern road out of Falkreath and continue until you come to a four-way intersection. Following the south road will lead you to Peak's Shade Tower, while the northeast and southwest roads lead to Pinewatch and Halldir's Cairn, respectively. Turn left onto the northeast road and you will soon reach a bandit outpost consisting of two wooden towers connected by a wooden bridge standing over the pathway. Shortly after you hit the bandit outpost, there will be a small mountain path marked with a pile of stones to the right.

Take the mountain path to the right and you will find a bandit camp with a tent and bedroll, as well as a tanning rack and firepit. If you are looking to the right of the camp, you will again see the mountain path, so continue on it as the dirt trail leads into the snow. Follow the trail until it stops, where you will be facing a rock wall. If you look to your left, you will see a pile of rocks. Past this rock pile on the right is a pile of rocks marked with a flag. 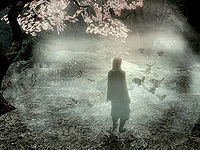 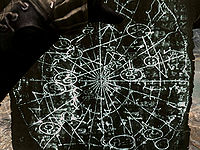 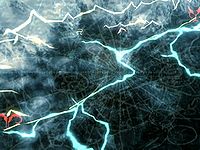 Continue past the flagged rocks and you will see a second flagged pile of rocks where the trail resumes. Follow it and you will reach the entrance to Ancestor Glade at the top of the hill. To find the entrance, head left on the pathway and look for a cave on the right. Enter the cave to continue the quest.

If you told Serana to leave you, she will be back with you once you enter the cave. Once in the cave, continue straight and up to the left a bit so you are in a wider cavern with trees. To get to where you need to go, continue up to the left so you are on a ledge. You can cross to the other ledge by going over a tree. Continue on the obvious pathway and you will hit a rock area that is lit up. Go left (the only way you can go) and continue on your journey. You will come to a huge cavern with a weird light shining up. If you look down you will see there is now an actual pathway with stairs further on so go down that path. The path will turn sharply, almost invisibly to the left so be careful that you don't miss it. Before you turn left, if you look straight you will see stairs in the distance. There is a stream separating you from the stairs. Jump down and turn right on the stream. Walk through the part where water is dropping down and keep going. Right after the little "rapids" in the stream, there is a rock to the right with a shield and a dagger on it. After taking what you want, follow the objective marker from the stream to where you need to go.

Activate the draw knife holder to get a draw knife. Canticle trees are everywhere but the closest one is to the north side of the place where you got the draw knife. After you have obtained some bark it will tell you to attract seven Ancestor Moth swarms. All of the swarms are flying around the Ancestor Glade and are in no predictable position so you just have to run around and find them. To collect them, simply run by them and they will start to follow you. Once you have all seven, the objective pointer appears in the beam of light. Go to where it points you and read the Elder Scroll (Blood). This will cause you to read all three scrolls.

After reading all three Elder Scrolls, you will see a map-like object that is glowing. Notable features include two red symbols, the one at the lower left representing the ram of Markarth, and the one at the upper right representing the wolf of Solitude. The lines represent rivers. The location of Auriel's Bow is shown by the small white symbol, similar to the Elder glyph

, near the head of the river in the top-left quarter of the map. Look at it for a while and your vision will white out. Once you regain your vision, you will be back at Ancestor Glade, with the map having disappeared.

Talk to Serana and she will ask if you are okay. Regardless of what you say, she will ask about Auriel's Bow and you will say "It's in a place called Darkfall Cave". She will ask where it is and you will say "The scrolls gave me its exact location", even though it's quite hard to find the cave in your vision. After that you complete the quest and the quest Touching the Sky will start. As you leave the cavern, you will be ambushed by Dawnguard Soldiers or Vampires, depending on whose side you chose in the Dawnguard questline.

This Skyrim-related article is a stub. You can help by expanding it.
Retrieved from "https://en.uesp.net/w/index.php?title=Skyrim:Unseen_Visions&oldid=2383096"
Last edited on 5 April 2021, at 23:13