Auriel's Bow is a powerful bow allegedly used by the elven god Auri-El. It is received from Gelebor during the quest Touching the Sky. Shooting the sun using Auriel's Bow with Bloodcursed Elven Arrows will block out the sun until the following morning, negating its negative effects on vampires for the duration.

Additionally, shooting the sun with Sunhallowed Elven Arrows will cause the sun to shoot out rays of light at nearby enemies in a similar fashion to Storm Call. 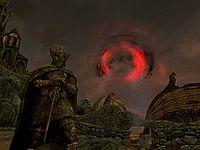 The Bloodcursed sun rises over Whiterun

One achievement is related to Auriel's Bow:

This Skyrim-related article is a stub. You can help by expanding it.
Retrieved from "https://en.uesp.net/w/index.php?title=Skyrim:Auriel%27s_Bow&oldid=2507732"