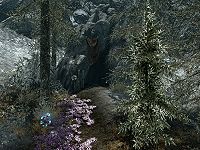 Forgotten Vale Cave is a cave located within the Forgotten Vale, and the location of one of the rare shellbugs.

The entrance of the cave can be found upon entering the first section of the Forgotten Vale by heading down the valley and following the eastern wall. The entrance is guarded by a Falmer and there is a gleamblossom plant to the left of the entrance.

The entrance leads directly into a chamber with bone chimes hanging from the ceiling and an pen with an unlocked gate containing a chaurus and a chaurus hunter, as well as two inactive chaurus cocoons, several chaurus egg sacs and glowing mushrooms on the cave wall. To the west the path splits with the left-hand side rising along a ledge to a rope release that opens a concealed door in the northwestern corner. While the right-hand side descending past a Falmer chest to the cavern floor. Around the walls are several Falmer hives, some contain chaurus hunters, others are empty. On the chamber floor there are four cocoons, but only one contains a hunter. On the north side of the chamber is an earthen ramp leading up to a series of raised ledges around the outer cave wall, at the far end is one more inactive chaurus cocoon.

The passage behind the concealed door leads down into another chamber containing another rope release that operates the door, a few glowing mushrooms, an inactive cocoon and one of the rare shellbugs. These creatures need to be mined with a pickaxe for their chitin (not attacked and looted). They also do not show up using the detect life spell. 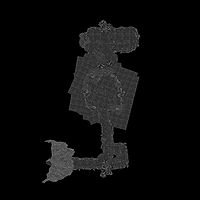