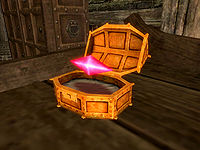 What Do We Have Here?Edit

In your travels about Skyrim, you will come upon an ornate jewel (one of twenty-four spread across Skyrim) called an Unusual Gem. Subsequent actions after you acquire one of these gems depends on your membership status with the Thieves Guild.

Not a Member of the Thieves GuildEdit

If you are not a member of the Thieves Guild, picking up the first Unusual Gem you encounter will activate the miscellaneous quest objective: "Bring the Unusual Gem to an appraiser".

Depending on your past travels and interactions, following your objective marker will likely take you to Maul, a Nord thief in Riften. If you have not yet spoken with Maul, he will seek you out with some unsolicited advice. After the conversation, ask him what he knows about the gem. He will tell you that you need to show it to Vex of the Thieves Guild, to find out what the gem is worth. Maul will also tell you that to get to Vex, you must first become a member of the Thieves Guild. If you press for information on the guild, you will be told to find Brynjolf in Riften's marketplace. You can find him as suggested, or in the Bee and Barb at night. Talking to him will activate the quest A Chance Arrangement, which is the first step towards becoming a member of the Guild. Once you have access to The Ragged Flagon, seek out Vex for her appraisal of the gem. She will tell you that it is one of twenty-four stones that were pried from the crown of Queen Barenziah by a thief in an attempt to cover his tracks, and that only the complete set of twenty-four stones would be worth anything. If Maul does not tell you to find Brynjolf, you can seek him out yourself.

Already a Member of the Thieves GuildEdit

If you are a full member of the Thieves Guild when you pick up the first stone, the quest is immediately activated with the objective: "Bring the Unusual Gem to Vex in the Thieves Guild". Find Vex in The Ragged Flagon. She will tell you that it is one of twenty-four stones that were pried from the crown of Queen Barenziah by a thief in an attempt to cover his tracks. She will further inform you that the stone is worthless on its own, but that if you can find the other twenty-three, the collection would be worth a substantial sum.

After showing the Unusual Gem to Vex, the gems are renamed "Stones of Barenziah," and will appear as such in your inventory when in your possession. You must now find all twenty-four stones.

You'll need to complete some other tasks before you have access to all locations where the gems are to be found:

Aside from those, most other gems can actually be obtained at any point in the game. Many are located in places that you will be sent to during other quests, so you may want to consider getting the stone concurrently with the quest.

The stones are located in the following places:

† Will be marked as stolen unless you are of an appropriate faction rank.

Find the Crown within Tolvald's Cave

Show Vex the full set of Stones, and she will have you travel to Tolvald's Cave to retrieve the Crown of Barenziah. The cave is three layers deep, and crawling with Falmer, so be sure to prepare yourself. When approaching the crown, three hostile Dunmer Ghosts will appear and attack. After returning with the Crown, you will receive the permanent effect Prowler's Profit, which significantly increases the chance of finding gems in randomized containers.

Notes
* Any text displayed in angle brackets (e.g., <Alias=LocationHold>) is dynamically set by the Radiant Quest system, and will be filled in with the appropriate word(s) when seen in game.
Retrieved from "https://en.uesp.net/w/index.php?title=Skyrim:No_Stone_Unturned&oldid=2683652"