This article is about the quest. For the ship, see Dainty Sload.

Once you've completed five jobs in the city of Solitude, speak to Delvin in The Ragged Flagon to receive a special job. Delvin explains that he has received word from Solitude about an opportunity. Erikur is an influential thane and businessman in Solitude. Apparently, he is "lookin' to run some kind of a shill job". Completing this job will not only earn you a reward, it is a chance for the Guild to regain some influence in the city. Travel to Solitude and speak with Erikur, who can be found during the day at the Blue Palace.

When you speak to Erikur, he explains the story behind the job: "Nothing raises my ire more than having an agreement broken. It's bad for business and it wastes time. Captain Volf of the Dainty Sload has decided to test my patience on this matter by neglecting to honor a trade agreement we had established." Your job is to frame Volf for possession of an illicit substance by acquiring some very rare, very illegal Balmora Blue and planting it in his footlocker.

From One Pirate to AnotherEdit 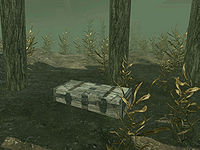 Sabine's Footlocker, hidden beneath the dock leading to the Red Wave.

Your contact for the contraband is a crew member aboard the pirate ship, the Red Wave. The Red Wave is docked outside the East Empire Company Warehouse just outside Solitude. Your contact, Sabine Nytte, will be on deck, waiting for you. Tell her what you're looking for, and she will ask for 1,500 gold for some Balmora Blue, claiming that she's the only person in Tamriel who can obtain it. If you accept her price, she gives you the key and directs you to the contraband, which is in a locked chest directly under the docks adjacent to The Red Wave. If you do not wish to pay such inflated prices, you can bypass speaking to Sabine altogether. Pickpocket her to get the key to the chest, then swim down below the docks or pick the lock to the chest and steal the Balmora Blue.

A Pirate Breaks the LawEdit

Make your way out to the Dainty Sload, anchored near Solitude's Lighthouse. There are two corsairs guarding the entrance to the interior of the ship. One remains looking out to sea, while another roams the deck. Engage them or sneak below deck through the unlocked door. Inside, there are more corsairs to deal with. Whether by sneaking or defeating the corsairs, head down the stairs into the bottom of the ship, then back up again until you reach the Captain's room.

The ship's first mate guards the area and has a high detection level. The Captain's Chest is your target and you can pick the adept lock, or you can kill the First Mate and take the key. On the table is an Unusual Gem and the Speech skill book A Dance in Fire, V6. Plant the Balmora Blue and make your way back to the entrance.

Travel back to Erikur at the Blue Palace (or at his home), who is very pleased with the fruits of your labor. He'll reward you with a random spell tome, and the assurance that he will re-open any doors in Solitude to facilitate the Guild's return.

Report back to Delvin. He'll give you your pay, and will compliment you on your actions, "Erikur assures me that Captain Volf will spend pretty much the rest of his life clapped in irons. Best of all, he's also pledged to open doors for us in Solitude and to get things rollin' again". He then points out that the added infamy you earned the guild has attracted a new merchant to The Ragged Flagon.

Notes
* Any text displayed in angle brackets (e.g., <Alias=LocationHold>) is dynamically set by the Radiant Quest system, and will be filled in with the appropriate word(s) when seen in game.
Retrieved from "https://en.uesp.net/w/index.php?title=Skyrim:The_Dainty_Sload&oldid=2682501"