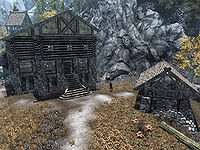 Black-Briar Lodge is a large remote building east of Riften.

The lodge belongs to the wealthy Black-Briar family, and is inhabited by hostile Black-Briar Mercenaries. During the quest Promises to Keep, you will have to break into the house and steal the identity papers for the horse Frost.

It consists of three zones. The first is Black-Briar Lodge, which is divided into a ground floor, a second floor, and a basement. The other two are exterior zones.

†Only appears during the quest Promises to Keep

Owned by one of the wealthiest families in Skyrim, the Black-Briar Lodge is huge and spacious, having three stories and as many entrances, all of them locked with locks of varying level. There are three hostile Black-Briar mercenaries guarding the exterior, and four inside the lodge. All of them carry the key to the three entrances. Once the quest Promises to Keep has been initiated, Frost the horse can be found outside the main northern entrance. 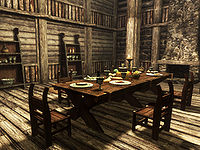 Upon entering from the main entrance, a ladder to the right leads to the basement, while a table to the left holds a bottle of wine. Across the hallway is an end table with clutter, with a sample of tundra cotton and a bottle of Black-Briar Mead on top. To the right of this table stands a wardrobe with clutter and upper-class clothes and an alcove with a food barrel. To the left is a hallway leading further into the house, past yet another wardrobe with clothes. Around the corner is a huge dining area with a doorway to the north leading further into the house and two ladders leading upstairs to the second floor. On a small table along the western wall are two bottles of wine and one of alto wine. Underneath the two ladders is a total of four food sacks. The dining table seats six and is dressed with a huge variety of food on display, including four loaves of bread, three potatoes, three cloves of garlic, two salmon steaks, two slices of seared slaughterfish, two grilled leeks, two wedges of eidar cheese, one apple pie, one baked potato, one head of cabbage, one eidar cheese wheel, one goat cheese wheel, one gourd, and a sweet roll. Additionally, the table holds beverages, including one bottle of alto wine, one of Black-Briar Mead, and one of Black-Briar Reserve. Surrounding the dinner table are several shelves with valuable utensils and more drinks, five bottles of Black-Briar mead, two bottles of wine, and one bottle of alto wine.

Continuing past the dining area through the entrance to the north will place you in a small storage area, where another ladder leads downstairs, and two sacks and a barrel all hold food. A door to the east leads to a bedroom with a double bed and even more valuables. In the eastern corner is a dresser with a novice-locked chest containing random items on top. At the foot of the bed is an unlocked chest with random items, while the end table next to the bedhead contains only clutter. The wardrobe contains upper-class clothes, and a set of shelves holds two loaves of bread, an eidar cheese wheel, and a bottle of wine. 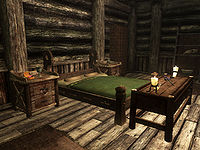 On the second floor, you can choose between doors to the north and south. The southern door leads to a food barrel and, behind the corner, a huge bedroom. Along the northern wall is an end table with clutter, with the Sneak skill book Legend of Krately House on top. Following the wall to the right, next to a small storage alcove, a chest holds some random items, while the wardrobe has some upper-class clothes and the chance of a book and some gold. Next to the bed, on an end table with clutter, is a Stone of Barenziah. The end table at the foot of the bed has a bunch of lavender on top. Lastly, the southwestern corner has an end table with more clutter, a wardrobe with clothes, and some shelves with two red apples. The northern door leads to another dining room, obviously rarely used, with an exit to Skyrim along the northern wall. A small table holds a bottle of wine, and at the other end of the room, a set of shelves holds two bottles of wine and two of alto wine. A novice-locked chest on the shelves contains random items, while the nearby end table contains clutter. A door leads to a storage room with two food barrels, three food sacks, two wheels of goat cheese, and a loaf of bread. 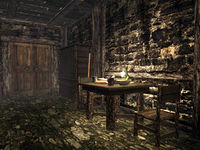 When entering the basement from the main entrance on the ground floor, check behind the ladder for a locked strongbox with a solid amount of gold. A set of shelves holds six gold coins, a bottle of alto wine, an apothecary's satchel, and a mammoth tusk. The next room has an apprentice-locked chest with random items, and if you have started the related quest, Frost's Identity Papers on an end table. The door to the north leads to a huge room with an exit to Skyrim and a total of six food sacks scattered around. A Black-Briar mead barrel with up to ten bottles of Black-Briar mead stands against the northern wall, opposite a small table with a bottle of wine, a slice of seared slaughterfish, a loaf of bread, an eidar cheese wedge, an cheese wheel, and some grilled leeks. A wardrobe holds some common clothes, and two doors lead to two bedrooms with unowned beds. The bedroom on the right contains a medium coin purse, while the one on the left contains an end table containing some gold.

The last room features a set of stairs leading to the ground floor and a food barrel behind the door. The western part of the room contains a huge counter with a potion of regeneration, some grilled leeks, and two bottles of Black-Briar mead. The northeastern corner holds a set of shelves with a huge amount of food crammed together, including eight potatoes, three gourds, three loaves of bread, two boiled creme treats, two wedges of goat cheese, two wheels of goat cheese, two green apples, two red apples, a sliced eidar cheese, an eidar cheese wedge, an eidar cheese wheel, and a sweet roll. Behind all the food sits a potion of minor healing and a potion of minor stamina.