After completing at least one of Nazir's contracts, returning to the Sanctuary will trigger a scene where a seemingly annoyed Astrid reluctantly welcomes Cicero to the hideout. As Nazir will deny you any rewards before you speak to Astrid, let the conversation finish and then wait for her to approach you. She will hand you the first real job for the Brotherhood: Markarth resident Muiri wants an ex-lover killed. Astrid asks you to show professionalism and explains that you can keep the entire reward, as this is your first contract.

In Markarth, Muiri will be at work in The Hag's Cure during the day and hanging out in the Silver-Blood Inn in the evening. Approach her and witness her surprise that the Dark Brotherhood actually still exists and that the Sacrament worked. She then explains the story of how she was once a very close friend of the Shatter-Shield family in Windhelm until she met womanizer Alain Dufont. Alain managed to seduce her but, as it turned out, used her to get close to the Shatter-Shield family and rob them blind. The love affair ended with Muiri being kicked out in the cold by the family and Dufont abandoning her, eventually rejoining his bandit colleagues inside Raldbthar.

Muiri understandably wants Alain dead, but will make a second request once you arrive, promising to raise the reward if carried out. Muiri wants Nilsine Shatter-Shield assassinated as well, as an act of revenge on the family. Recently the Shatter-Shield family lost youngest daughter Friga to a serial killer and their mourning process was part of Dufont's plan and the very reason he seduced Muiri. The family held Muiri responsible and refused to talk to her ever again. Muiri now reasons they may see just how wrong it was to kick her out if their only remaining daughter dies. You automatically accept the task, but it is optional. Asking her for elaboration will net you two samples of poisonous lotus extract, which may come in handy.

Note: If you have yet to trigger the quest Blood on the Ice, do so before killing Nilsine Shatter-Shield. See this section for details. If there is a dead woman lying near the Windhelm Hall of the Dead, then Blood on the Ice has been triggered.

All Windhelm citizens know of the tragedy that recently hit the wealthy Shatter-Shield family and will often talk about the serial killer's first victim, Friga Shatter-Shield. When speaking to the grieving parents, Tova and Torbjorn, both will express great sadness, especially Tova. Unaware that Muiri plans her revenge, the family, including your target Nilsine Shatter-Shield, tries to move on in life. Nilsine can be found roaming around town all day long: browsing the market in the morning, standing near her sister's now-abandoned house, Hjerim, in the afternoon, and spending her evenings inside the Hall of the Dead on weekdays and in the Temple of Talos on weekends. It is not possible to trigger her anger during conversation, so a stealthy kill when she is alone in the evening is preferable. When the deed is done, move on to the real target, Alain Dufont, or return to Muiri in Markarth. Killing Nilsine will cause her already bereaved mother, Tova, to commit suicide in their clan home in Windhelm. 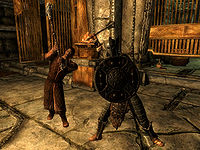 Alain Dufont and one of his guards

Raldbthar is a Dwemer ruin located on the snowy mountainside east of Korvanjund, past Shearpoint. It is one of the three entrances to Blackreach. The target, however, has taken up residence in the first zone, so the trek will not be long. A few bandit enemies patrol near the entrance, so dispose of them, enter the ruin, and fight another bandit inside. Near the first intersection, the inhabitants have been creative with one of the ancient fire traps and a charred skeever will slowly cook when it activates. The path straight ahead is hindered by said fire trap and a leveled lock. For a better chance of a surprise attack, take the eastern tunnel and kill a few bandits along the way. Down the last set of stairs is where Alain Dufont resides, so consider entering sneak mode as you descend. There's a group of three bandits in the chamber and a fourth bandit hidden behind the southern gate. There is an oil slick on the ground that you may take advantage of by using a fire spell to roast the opposition, the unarmored Alain included. Fighting them normally is also an option, but beware of Alain's weapon of choice, the unique and enchanted warhammer Aegisbane. When Alain is dead, the quest will update. Return to Muiri or, if you have yet to optionally kill Nilsine and still wish to do so, head to Windhelm.

When you return to Muiri in Markarth, she will show no remorse whatsoever and will hand you a leveled amount of gold for taking care of her ex-lover. If you chose to kill Nilsine Shatter-Shield, you will receive the unique Muiri's Ring which boosts the strength of potions by 15%. Completing the optional objective will also allow you to marry Muiri. Back in the Sanctuary, Astrid will thank you for a job well done and will proceed to show greater paranoia concerning Cicero and his insanity. She will finish the quest by asking you to do her a favor, starting the next quest Whispers in the Dark.