During your adventures, you may come across the rare book Of Fjori and Holgeir, the tragic tale of a huntress and a warlord who fell in love fighting each other during a battle between forest clans. They fought to a standstill until her sword broke his axe and his shield dulled her blade, and their love was so obvious that the battle instantly ended and brought peace to the forest. When winter came, a snake bit Holgeir, and Fjori obtained an elixir from Akavir to cure the poison. While she was giving the healing elixir to her loved one, instantly curing him, the snake bit her as well, and Holgeir couldn't save her. Out of grief, he built an ancient tomb and took his own life, hoping to rejoin Fjori in Sovngarde.

The Nordic ruin of Ansilvund is hidden in the Velothi Mountains, far north of Riften, and can be reached by following an unmarked path east of Cragslane Cavern. Near the entrance you will find the book about Fjori and Holgeir on a table, protected by a hostile conjurer, hinting at unsolved mysteries inside. 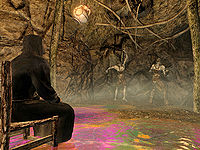 The first area of Ansilvund is an excavation site, complete with mining equipment, wooden structures, and narrow tunnels. Unfortunately, the site is guarded by hordes of hostile conjurers, necromancers, and mages accompanied by a huge number of leveled draugr enemies, so be prepared for a long trek. Through the cobwebbed room, if you are undetected, you will witness the unusual sight of two draugr mining the blocked path with a seated warlock overseeing their efforts. Obviously enslaved by the warlock, the two draugr will keep hammering on the wall, for reasons unknown. You can either sneak past them or use the oil on the floor to your advantage, even if it will alert all enemies lurking in the surrounding areas. Regardless of your choice, proceed forward through the door. In the third room, a disembodied voice will echo trough the tunnels with a warning:

"I am Lu'ah Al-Skaven. Who are you to disrupt my work? Begone, or I will add you to my army of the dead!"

At the top of the planks, there is another patrolling warlock, and after that is a room with three seated warlocks having a discussion beside a cooking pot and an arcane enchanter. Their conversation provides a bit of explanation on the hard-working draugr enemies you encountered in the previous room:

Female: "I think it's sweet Lu'ah is so worked up over her dead soldier..."
Male: "Yeah, but raising Draugr to take on both the Imperials and the Stormcloaks? That's just crazy."
Female: "True, but I'm not going to be the one to try to oppose her..."

If the three warlocks detect you, you will have no choice but to battle them. Proceed forward to the third room, where a beam of blue light will shine down at the corpses, immediately reanimating them. The voice will once again be heard, saying, "Rise from your graves to defeat this worm!" Defeat the four draugr enemies and proceed to the next room, but beware the ceiling spike trap. Head to the upper level and take the western path through more narrow tunnels until you reach a room with a conjurer and a flame atronach. Defeat the foes and examine the area to the north where you will find four rotating pillars and a handle. For a bit of investigation, search the table below the pillars for the unique book Lu-ah's Journal.

The journal tells the story of yet another tragic love affair, this time between a conjurer named Lu'ah Al-Skaven and her husband Saeel. According to the journal, Saeel died fighting for the Empire against the Thalmor twenty-five years ago. During her grieving period, Lu'ah learned the story of Fjori and Holgeir, which led her to Ansilvund, hoping to transfer Saeel's soul to Holgeir's body. In order to reach the burial chamber, she started reanimating the dead, using them as vessels to clear the way.

The puzzle in front of you can be solved in two ways, as it is based on the story of Fjori and Holgeir. The book is conveniently placed next to Lu'ah's Journal and, when examined closely, will reveal the following sentences related to the puzzle:

As the Eagle finds its mates, so too did Fjori find hers in Holgeir, and a time of peace came to the clans of the forest.
But the Snake came and bit Holgeir, its venom seeping deep into the wound.
A Whale greeted Fjori's view as she came over the snow-covered mountains to the coast.
But the Snake bit Fjori as she poured the last drop into Holgeir's mouth, and fatigued from her journey, she joined the ancestors immediately.

From left to right, turn the pillars to match the words in the book. Alternatively, an easier solution is available. as the correct symbols can be found behind the table, mostly overgrown but still visible. With the pillars in place, pull the handle and the door to Ansilvund Burial Chambers will be accessible. 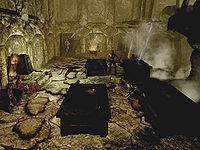 "Rise from your graves to defeat this worm!"

The Chambers area starts off with a crypt filled to the brink with traps, all triggered by pressure plates, so navigate your way to the intersection. Behind the locked gate sits a locked boss-leveled chest and a chain that controls all traps in the area, including the swinging blades you may encounter in the southern tunnel. The next room is large and is divided into two levels. Make sure to read the Ilusion skill book 2920, Sun's Dawn, v2 found on a booby-trapped pedestal across the room from the entrance, then locate the four sarcophagi in the southeastern area and claim the Ansilvund Key from the pedestal. As soon as you take the key, a dart trap will trigger, and five draugr enemies will burst out of their coffins while Lu'ah Al-Skaven speaks once again: "I shall have vengeance for the death of my husband. Rise!" Defeat the enemies, then head upstairs and use the key to unlock several gates until you reach a wooden door. The next area sees another enslaved draugr hacking away on a wall, overseen by another warlock. Make your way up and through a door until you end up on a narrow bridge with more pressure plates, designed purely to push you off the ledge. Beware of the attacking draugr and make your way into a crypt where another ray of blue light will reanimate another wave of undead enemies while Lu'ah will speak once again:

"I could not raise him, but I will raise an army to avenge his defilement!"

Proceed forward and beware of even more traps until you reach a large iron door, the very entrance to the main burial hall, the location sought out by Lu'ah, and the place where she hoped to reanimate her husband through the body of Holgeir. Apparently, she failed. 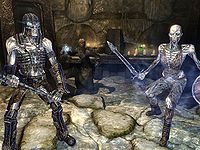 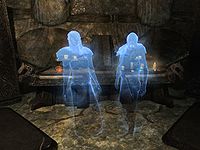 "Thank you for releasing us from her spell."

The burial chamber is large and has a dead draugr lying on an altar, right in front of two closed sarcophagi, as well as a dead skeleton on the floor and several oil lanterns hanging from the ceiling. As you approach the altar, Lu'ah Al-Skaven will appear from the shadows, saying:

"They burned his body before I could raise him... it should have been returned to me... You will not stop me from killing those who wage this pointless war!"

With these words the two sarcophagi will burst open and the mummified remains of Fjori and Holgeir will come rushing out, now slaves for the residing, vengeful conjurer. At the same time, Lu'ah Al-Skaven will re-animate the skeleton on the floor, so you will face four enemies at once. Fjori and Holgeir are both strong draugr enemies, and Lu'ah will shower you with a wide array of spells, including Ice Storm and Ice Spike along with the expected conjurer spells and a Grand Healing spell for restoration. If you kill either Fjori and Holgeir, Lu'ah will immediately revive them, so go directly after Lu'ah. When she is dead, Fjori and Holgeir will fall to the ground, and blue rays of light will emerge from their bodies. With the curse finally broken, the ghosts of the two lovers will emerge behind the altar, and they will wholeheartedly thank you:

Fjori: "Thank you for releasing us from her spell."
Holgeir: "Now we can rest in peace once again. Come Fjori, my love..."
Fjori: "Take this with our gratitude."

They will both disappear and your reward will be ready on the table behind them: the unique sword Ghostblade. Make sure to pick up the Unusual Gem, then loot Lu'ah Al-Skaven for her key and unlock the northern door. Inside you'll find a boss-leveled chest, the spell tome Transmute Mineral Ore, and a hefty amount of soul gems. Lastly, find the Imperial Condolences letter on the table for a final explanation on what drove Lu'ah Al-Skaven into insanity and why she formed her army of undead allies.