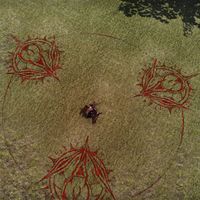 ​ Soul Leech synergy, dealing 4162 Magic Damage to them and healing for the damage caused.

Soul Shred deals Magic Damage to enemies and stuns them, while allies can activate the

​ Soul Leech synergy to steal their Health. The Soul Siphon morph changes it into a group healing spell and removes the damage and stun effect, though your allies can still cause damage using the synergy. Or you can use Soul Tether, which adds damage over time and heals you.

1.2.3
* Soul Siphon: Edited the tooltip for this ability so it's more consistent with all other tooltips, and fixed an issue so the upgrade tooltip now states that it does less damage than the base ability.
1.4.3
* Shadow Cloak: This ability is no longer removed by the following ticking damage abilities.
1.6.5
* The Synergy of Soul Shred is now only available to lowest health ally, but is also more potent.
2.3.5
* Soul Shred: Increased the damage from the Soul Leech synergy from this ability and its morphs by 3%.
2.6.4
* Soul Tether now displays an area effect telegraph.
2.7.5
* Fixed an issue where the Soul Leech synergy from this ability and its morphs could occasionally heal based on a different source of damage than itself.
3.2.5
* Soul Siphon:
4.0.5
* Soul Siphon: Increased the radius of the heal applied by this morph to 28 meters from 15 seconds.
5.0.5
* Increased the radius of this ability and the Soul Tether morph to 8 meters from 6 meters.
5.2.5
* Soul Tether (morph):
6.0.5
* The synergy granted from this Ultimate and its morphs will now work for allies who are 10 meters or closer to the target, rather than 10m or further.