The UESPWiki – Your source for The Elder Scrolls since 1995
< Online: Skills: Mages Guild
Jump to: navigation, search 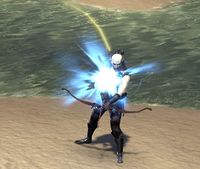 Entropy deals Magic Damage over time to a single enemy, while also healing you and increasing your Spell Damage. The Degeneration morph adds an additional chance of healing to your regular weapon attacks on the affected target, while Structured Entropy passively increases your Maximum Health while slotted.