< Elder Scrolls Online: Quests: Thieves Guild
Velsa left a note, asking that I come to visit her at her garden. She has something she wants to discuss.

When you are inside the Thieves Den, there's a small note from Velsa pinned to a wooden post. It reads:

You'll find Velsa in her garden. You can trespass through Abah's Landing's Warehouse District, or you can head through the Flooded District as you did the first time you met her. Speak to her:

"Took your time, didn't you?
But you're here."
I got your note. You wanted to talk to me?
"I... I need your help.
I was in the market when someone slipped me a letter. It might not mean anything, but on the other hand, it might be some sort of trap."
Tell me more about this letter you received.
"A folded sheet of paper, unsigned. It was only a few lines, wishing me well. But when I unfolded the sheet, an old, pressed stargazer peony fell out.
That... that unsettled me."

What's a stargazer peony?
"It's a flower. Others just like it blossomed all around my family home. But I left my family behind a long time ago.
If this is their way of sending me a message, I need to know why now after all these years."
You want me to find out who sent the letter and why?
"You've consistently demonstrated a lack of incompetence. Find out if my family sent that letter. I didn't part on the best of terms, so it could be a trap. But they won't expect you, which means it shall be slow to spring."

You must have some notion of what this is all about.

"Decades ago, I was Velsa Arendis of House Dres. Yes, the one built on the spoils of the slave trade.
When I fled, I released dozens of slaves. Gave them gold from the house treasury. I regret not seeing the look on Mother's face. But nothing else."
You didn't see the person who slipped you the letter?
"Yes, but I didn't realize it then.
I was taking a merchant to task for her prices when a half-naked Nord bumped into me. That's when it happened. He fled before I could give him a piece of my mind, toward the merchant camp outside the city gates."
I'll ask around and see what I can find out.

The note that Velsa received is on the table. Read it:

It has taken a long time to find you.
Know that someone thinks of you.
And hopes you are well.

Next, track down the Nord: a man named Tovjor, who is lounging by the Abah's Landing Wayshrine. After some convincing, he'll tell you that he was paid by a Khajiit woman in another city to deliver the letter to Velsa: 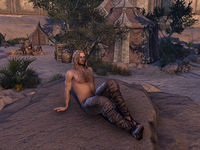 Will the half-naked Nord help you find out who sent the letter?

"My uncle went to town, but he should be back shortly if you need something. I'm still learning the business and I'm not allowed to do anything.
My uncle says I don't have a head for numbers. I say as long as my head looks pretty, what else matters?"
Did you slip a letter into a Dark Elf's pack?
"What? No. That wasn't me. Did you see something? There are plenty of half-naked Nords running around Abah's Landing ....
Oh, stop interrogating me! I'll confess! It was me! It was all me! But that's all I can say. Client confidentiality, you know."
It's important to someone, just tell me.
"Not breaking my word is important too.
But also mead. Mead is important."
[Bribe] The Dark Elf wants to make contact with whoever gave you the letter.

"Gold! I like gold!
I met a Khajiit woman in Riften while I was drinking at the inn. She paid me to deliver the letter to the Dark Elf lady here. Never got the Khajiit's name, though. Sorry."

[Intimidate] I wonder what your uncle would say about your little side business. He might want a cut.

"You'd tell my uncle? That's not very friendly of you.
Oh very well! I met a Khajiit woman in [city], when I was drinking at the inn. She paid me to deliver the letter to the Dark Elf lady here. Never got the Khajiit's name, though. Sorry."

Tovjor will direct you to a different city depending on your alliance: Aldmeri Dominion players will need to head to Rawl'kha in Reaper's March; Daggerfall Covenant players will need to travel to Evermore in Bangkorai; and Ebonheart Pact players will find the Khajiit in Riften, capital of The Rift. If you have not discovered the wayshrine for the relevant city, it will be flagged as discovered immediately after the conversation, allowing you to fast-travel to your goal.

Outside of the city's inn, you'll find Faradan; speak to him:

"Don't recall seeing you before. So many new people coming through. Makes my head spin!"
I'm looking for a Khajiit woman.
"Not at all the question I expected. You have piqued my curiosity.
Why do you seek some random Khajiit? Is there some problem?"
She sent a letter to a friend. The friend wants to reconnect.
"Oh, well, in that case .... An elderly Khajiit does work here. She's a cook. Bakes the best pies in town. They really are quite tasty!
But she's indisposed at present. I won't let you disturb her rest."
How long has she been working here?

"That's something you'll have to ask her. It's not my place to talk about the hired help.
I do believe she traveled a fair bith in her youth, though."

Can you at least tell me her name?

"I suppose that won't do any harm. Narahni is a kind, gentle old woman. And a master baker of scrumptious pies.
The people here are very fond of her. And very protective."
Thanks for your help.

You'll find Narahni inside, on the upper floor of the inn. Speak to her: 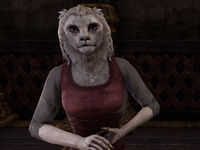 "Your face ... this one doesn't recognize it. Are you looking for a piece of pie?"

"Your face ... this one doesn't recognize it. Are you looking for a piece of pie?"
I came to talk to you. Did you send a letter to Velsa Arendis?
"Velsa? She didn't come with you? Ah, this one was foolish to even send the letter in the first place. Or the peony.
I hoped the years would have softened her memories. That she might have wanted to see her old friend one more time before the end."
Why send a letter? You should have just gone to see her.

"This one is no longer the young and brave Khajiit that fell in love with Velsa, and it took a long time to even discover she might be in Abah's Landing.
Now I am old and my mind isn't what it once was. Velsa would never even recognize me."

She was afraid the letter was a trap.

"Oh, stupid Narahni, this one should have thought of that! She feared her terrible family was trying to lure her out of hiding. I should have signed the letter.
But you must understand, when we parted, Velsa was hurt very much."
Tell me what happened.
"Velsa loathed her family's business. This one was a slave then, working in the family's kitchens. We ... fell in love.
We made a plan to free all the slaves. But she thought I betrayed her. She disappeared before I had a chance to explain."
I think you should go and talk to her.
"Do you really think so? Perhaps that would be best. Enough time has gone by without this one seeing Velsa's sweet face. Even if she's still angry, at least I can tell her that I never betrayed her. Since she didn't come here, I'll have to go to ther."
Good. Let's go to Abah's Landing.

Faradan: "Narahni, are you all right? I specifically stated that you were not to be disturbed!"
Narahni: "Easy, my friend. This one has decided that the time has come to travel and mend old wounds."
Faradan: "The letter bore fruit? I wish you well, but we're going to miss your pies around here."
Narahni: "Could you open a portal to Abah's Landing, my friend? A long journey always makes this one's old bones ache."
Faradan: "Gladly, but I can't keep it open for long. The innkeeper doesn't like me using magicka in here."
Narahni: "This one will write to you. And I'll even sign the letter this time!"
Faradan: "Of course. Now give me a moment to concentrate."

The portal will open.

Narahni: "Come, my new friend, let's take this portal to Abah's Landing. If you dislike portal travel, then make your own way and meet me there."

You can activate the portal to arrive in Abah's Landing's Warehouse District, or make your own way. If you take the portal, you'll arrive next to Narahni:

Narahni: "So good to see you, my friend. Sometimes portals can be tricky."

"Time flows so differently for a Khajiit and a Dark Elf. I am old now, but Velsa ....
No matter. This one will be glad to see her friend again."
Velsa lives in a secluded place. Let me know when you're ready to see her.
"Ready? This one is nervous, but I am also ready. Lead on and I will follow."
I'll lead you through the secret passage.
"A secret passage? Velsa always loved secret passages! Let's go!"

Enter the spider-infested building and search for the ladder to Velsa's villa. When you reach it, Narahni will tell you to go ahead:

Narahni: "Ah, dark and dusty! Just like the secret passages from my youth. You go ahead. This one needs a moment."

When you enter, Velsa will speak to you:

Velsa: "Did you find out who sent that letter? Not that I was overly concerned ...."

Narahni: "Someone who lacked the courage to sign their name, but now wants to make amends."
Velsa: "Narahni! Is it really you? Just the sight of you opens old wounds ...."
Narahni: "Oh, Velsa. I know what you saw, what you must have thought. This one never meant to hurt you."
Velsa: "I saw you in my brother's arms! He was the worst of my family! How could you?"
Narahni: "He arrived at exactly the wrong moment. I had to do something or our entire plan would have failed."
Velsa: "You ... you didn't betray us? You ... did that for ... me?"
Narahni: "It was the only way to guarantee your escape."
Velsa: "I let the years flow by without giving you a chance to explain. What a waste! But I'll make it up to you. I'll keep you safe."

Speak to Velsa to complete the quest: 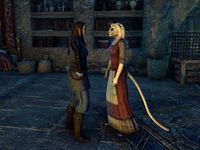 The old lovers have reunited

"Is this what happiness feels like? Yes, I suppose it is."
You seem glad to see Narahni again.
"I had no idea this would be the result of sending you to find a half-naked Nord.
The last time I saw Narahni was quite unpleasant. There was poison in that wound. I don't think it ever truly healed."
You weren't an easy person to get along with, that's for sure.
"You reunited me with my one true love, so I choose to ignore that.
I hope there's time to share a few lasting moments before all is said and done."
You both have a lot of catching up to do.
"All these wasted years, we've missed out on so much. Narahni wears them like a cloak—though with grace and style.
I am ... grateful ... you convinced her to stay here."

Velsa: "Narahni, you must be tired after the journey. Relax and we'll talk later. I know we have so much to tell each other."

Notes
* Any text displayed in angle brackets (e.g., <Alias=LocationHold>) is dynamically set by the game and will be filled in with the appropriate word(s) when seen in game.
Retrieved from "https://en.uesp.net/w/index.php?title=Online:A_Faded_Flower&oldid=2469267"