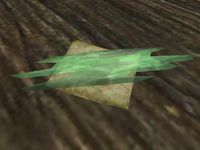 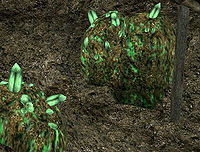 "Raw glass is similar to raw ebony, but less well-known. Ebony is jet black, while glass is a milky translucent green. Less durable, but much lighter and more flexible than ebony, glass is used primarily to make the distinctive, elegant glass armors and weapons of High Elven design."

Raw Glass is a valuable commodity, actually more so than Raw Ebony when you consider the value:weight ratio, since Raw Glass is 1/5th the weight of Raw Ebony and just as valuable. It is not sold by any restocking vendors, though all who deal in ingredients will buy it from you if you have any. The most abundant sources are in mines, though these tend to be heavily guarded. Raw Glass can also be found in barrels and other containers in Dwemer ruins, though these are less predictable. If you have the Tribunal expansion, you can use it to have custom Glass Armor crafted for you by Bols Indalen at the Craftmen's Hall in Godsreach.

A quest version of Raw Glass exists, which looks exactly the same as the normal version, but has a unique ID: ingred_raw_glass_tinos. 10 samples of this variant are needed for The Angry Trader quest, and can be found inside a chest in Beshara. It is possible to mix both versions of Raw Glass to make a potion with all four of the ingredient effects, but it will prevent you from completing the quest, and such a potion would have only one beneficial effect. The special variant cannot be used by Bols Indalen.