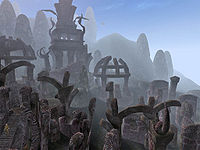 Esutanamus is a shrine to Molag Bal south of Tel Mora. The exterior of the shrine is guarded by a few leveled daedra and two Nord barbarians. The entrance to the shrine leads into a small antechamber, guarded by an Imperial agent named Arrinis Cerunia. He is a medium trainer in Speechcraft and Light Armor, and a minor trainer in Sneak, if you can manage to sneak up on him or calm him down. The antechamber is also guarded by a Dunmer mage named Arvamea Dalvani who carries a random soul gem as well as the Destruction skill book The Art of War Magic. The door leading from the antechamber to the main shrine room is trapped.

The main shrine room is guarded by a Dunmer battlemage and a Redguard healer named Chark. Chark carries the Restoration skill book, Mystery of Talara, Part 2. The altar holds a steel battle axe and dagger along with a pearl, a piece of raw glass, and a cursed ruby. Behind the altar are two trapped chests, one locked (level 45) and one unlocked, both containing an assortment of random magical items, potions and books. 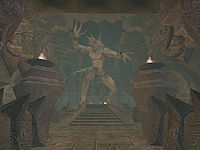 The shrine to Molag Bal within Esutanamus 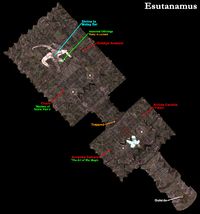