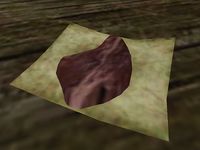 Human Flesh is an extremely rare ingredient. It cannot be harvested from humans. It is identical to Rat Meat in appearance, though not in effects.

In the standard game there are only four samples of it to be found, all in the cave of Palansour. The Bloodmoon expansion adds three more samples: one in Lassnr's house in Skaal Village, and two pieces in the cavern of Legge. One of the Grizzly Bears has eaten one of the settlers (and his Ring of Wizard's Fire) and will drop the two samples after you kill it.