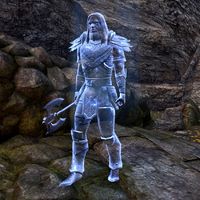 Ysgramor was an ancient Atmoran king who came to Tamriel before recorded history as a refugee fleeing civil war in Atmora. He appears as an ethereal spirit during several quests for the Ebonheart Pact.

There is a statue to Ysgramor in Fallowstone Hall's Hall of the Dead. You must read it to progress the quest.

<The hands of this statue are clenched, as if they once held something. A plaque sits at the feet of this statue.>
"Ysgramor, the greatest of us all. He bears Wuuthrad, mighty axe of legend."

The Rise of Sage SvariEdit

Ysgramor appears in the third vision at the Shrine of Ysgramor, where he and Ylgar fight Sinmur. After the giant is dead, Ylgar turns to face you.

Ylgar: "Even the giant Sinmur fell to the might of Ysgramor and Wuuthrad!"
Ysgramor: "And so shall all the Companions' foes fall!"

Collect the shard of Wuuthrad and the legendary hero appears:

Ysgramor: "Impressive deeds, hero. One of my Companions could not have done better. Celebrate your victory!"
"I see a hero standing before me. You have risen high in my estimation today."
What should I do with the shard, Ysgramor?
"Even a shard of the mighty Wuuthrad is a potent artifact. My ancient axe still has power left. Use it, hero!"
Against Sinmur?
"Aye! Sinmur and Thallik lurk at Trolhetta. I can feel them, like rotted teeth that must be pulled. Use the shard's power to end them!"
I will!
"Are you still here? Are there no more Worm Cultists to kill? Pursue these villains and perhaps we will meet again!"
Can you tell me about your battle with Sinmur?

"That was a struggle for the ages! Long did we battle, a titanic fray. Weariness finally made him stumble and I sank Wuuthrad into his ugly face. How we drank my victory that night!"
It seems Sinmur has returned.
"He's your problem now, hero. I hope you're up to the task!"

Why is Wuuthrad so powerful?

"Because it was my weapon, forged from my bitter tears after our defeat by the wretched Elves! I slew legions of mighty foes with it; Wuuthrad's legend and power grew with my own."
So even its shards have power?
"Yes, as you have seen here. Even that worm Gullveig, forever may her soul roast, could use a small piece of Wuuthrad to suck the souls from innocents. Imagine what Wuuthrad whole again could do!"

Ysgramor appears after Sinmur's defeat. Once the battle is done, Jorunn will notice something below:

And with those last words, Ysgramor and the five hundred fade back to Sovngarde.

This Elder Scrolls Online-related article is a stub. You can help by expanding it.
Retrieved from "https://en.uesp.net/w/index.php?title=Online:Ysgramor&oldid=2335405"