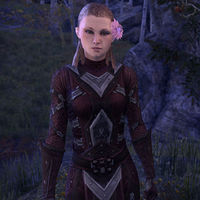 Hildegard is a Nord member of the Dark Brotherhood. She is also a werewolf and has been struggling to live among other humans.

During Welcome Home, Hildegard is too shy to greet you and instead hides in her cage in werewolf form. When you talk to her later, she'll say,

"Oh, hello. Sorry about not greeting you earlier. I … wasn't exactly in a talkative mood when you arrived."
You seem nervous. Is everything all right?
"I suppose. It's just, well, my condition. The lycanthropy.
My transformations. I can't trigger them at will and they don't follow any pattern we've been able to discern. Venom called it a "divergent strain." I'm not sure what that means."

So you could turn into a beast at any moment?
"I guess so. Usually I can feel it coming, kind of like when Kor feels a storm in his big toe.
As long as I can get out of the Sanctuary or into my cage before I lose control, I won't hurt anybody. At least, not any of the family."

Ever thought about seeking a cure?
"I don't think I want to be cured. The wolf is a part of me. It's who I am.
I would like to learn to control it, though. Kor and Mirabelle think I'll get the hang of it eventually. Venom even keeps meticulous records every time I change."

You don't seem like a typical assassin.
"Neither do you, come to think of it. Is it bad to be … different?
I may not have the training or experience of some of the others, but Astara says I'm the best tracker in the family. Whenever a target tries to hide, I always find them."

And you don't have a problem with killing?
"The wolf kills. That is its purpose.
Astara taught me that I become a wolf in order to accomplish what the Night Mother requests of her children. My prey already belongs to Sithis. The wolf just helps them find the Void."

By ripping them apart?
"I don't remember much of what the wolf does. Kor assures me that I'm never cruel when I send souls to Father. I trust my Brother. And I trust Astara. They saved me. Gave me something to believe in. For that, I'm happy to serve the Dark Brotherhood."

"I did not mean to cause so much trouble. I never meant to put you or Kor in harm's way."
Why didn't you return to the Sanctuary, Hildegard?
"I meant to. But the Chanter told me I had to flee. He said my past and my wild nature were going to cause the people I love to come to harm. He said the deaths of our Brothers and Sisters were my fault—and it was going to get worse if I remained."
Chanter Nemus told you all this? He knows about you and the Brotherhood?
"The Chanter sings to the Divines. He speaks for Akatosh! I had to tell him things. About me. About the family.
It happened before. I was a danger to my wolf clan. Now I am a danger to Kor. To you and the others. You're all better off without me."
Chanter Nemus deceived you. He sent the Silver Dawn to kill you.
"No! Why would the Chanter do that? He told me to return to my old life, to the wilderness. He said I'd be safe, that no one else would get hurt if I left.
He promised that Akatosh would show me the way!"
We're a family, Hilde. We protect each other. We're stronger together.

"You … you really mean that? Even after I abandoned the family, you still want me around? I'm sorry I caused so much trouble. I let my fear allow the Chanter to deceive me. That is not going to happen again. Kor and I, we'll handle things. Together."
Let's get back to the Gold Coast.

You abandoned us when we needed you the most. It was foolish and dangerous.

When spoken to at any point after agreeing to return to the Gold Coast, Hildegard has this to say if you were kind to her:

"Now that it's all over, I feel like a fool for listening to the Chanter. I might have to pay him a visit one of these nights and even the score."

If you were harsh to her:

"I won't run off again. I promise. My place is with my family. No matter what happens.
Still, I hate that the Chanter tricked me. I'm going to follow Kor's suggestion and stick a fork in the old fool. Or in this case, a very sharp knife."
You said you were a danger to your wolf clan. Can you tell me about that?
"I guess you never heard. I grew up … different.
My parents were Nords, but we followed a different path from most other Nords. We admired the were-beasts. Wanted to be like them. We … drank their blood."
And that's how you became a werewolf?
"My clan were hunters. We worshiped Hircine. Becoming a werewolf was part of that. It was the way things were done.
But I could not control my wolf form. I … I hurt someone. Badly. After that, I ran away. To save them."
And that's when Kor found you?
"Not at first. I lived on my own, deep in the mountains. I was wild, feral. Then Kor found me. He took me in and gave me a family again. If not for him, I don't know where I'd be right now.
Now if only I could make that damn Chanter pay …"

Back in Anvil you can agree to take care of the Chanter for her:

I'll handle the Chanter. Where can I find him?
"You'd do that? For me? I … thank you.
Chanter Nemus tends to the Akatosh shrine in the Chapel of Dibella. He spends a lot of time in the chapel office when he isn't lying to foolish young women. Make him feel pain before you kill him, all right?"
I'll take care of the Chanter. Go home, Hildegard.

You can talk to her again before leaving to take care of the Chanter. If you were kind to her she will say:

"It means a lot that you still want me to be a part of the family. I won't let you or Kor down again.
Just make sure Chanter Nemus pays for what he tried to do to me."

If you were harsh to her:

When you have been promoted to the rank of Assassin, speak to Hildegard. She will say, "I overheard Astara taking. She praised your skill and obedience, which is a rare thing. You're really making a name for yourself and she appreciates it, even if she doesn't always show it. Keep it up. Just stay safe, all right?"

When you have returned from your mission at the Enclave of the Hourglass, Hildegard is sad to hear of Mirabelle's death, "Mirabelle … But she was so strong. So … Mirabelle. I hope she finds Cimbar in the Void."

Hildegard and Kor participate in the raid on Kvatch's Cathedral. You come across them pretty early:

[Hildegard, in werewolf form, howls in the distance.]
Kor: "Hilde, wait! Hilde! Hildegard! By all the ice in Eastmarch, she's fast when she's furry!"

After you aid Kor in fending off a Wamasu Matriarch, Hildegard reappears briefly:

Kor: "That was … intense. Glad you showed up when you did."
[Hildegard enters the room.]
Hildegard: "There you are, Kor! Did you need to stop and rest again?"
Kor: "I never rest when there's trouble around! We dealt with the big monster, and now I'm taking a break."

If you manage to speak to her after killing the wamasu, she'll decry:

"Did you really have to kill the wamasu? She was just defending her children.
Sorry, I—I should not complain. You've got a lot on your mind, what with the Primate and all. We'll wait here and make sure the way remains clear for the others."

When the mission is over, you can speak to her:

"I'm glad Artorius is dead. Does that make me a bad person?
He took Mirabelle and Cimbar and the others away from us. Ultimately, their deaths are on his head. I'm glad I was there to see you finish him off, Silencer."

While in the Sanctuary you have the opportunity to strike up a conversation with her. After you become a Silencer, she can be found in the kitchen area with Kor and Remains-Silent.

"I'm happy for you, Silencer, but I miss our lost Brothers and Sisters. Durisa, Van, Cimbar, Mirabelle, Green-Venom-Tongue. Dread Father must have needed them at his side."

"I'm so proud of you! Silencer. I never expected to know one of them.
You accomplished so much in so little time. Fortunata, the Black Dragon, Artorius. Tanek says you did it to make the rest of us look bad. That's not true, though, is it?"

"I'm glad Artorius is dead. Does that make me a bad person?
He took Mirabelle and Cimbar and the others away from us. Ultimately, their deaths are on his head. I'm glad I was there to see you finish him off, Silencer."

You can also witness her conversations with other Dark Brotherhood members in the main hallway.

Tanek: "I had some questions. Kor said I should ask you directly."
Hildegarde: "No, I don't shed, nor do I chase tossed bones. Yes, I mark my territory. No, I don't know why."
Tanek: "I wanted to know how your hair stays braided when you transform back. You mark your territory?"
Hildegarde: "No! No, I was joking. It was a joke."
Tanek: "Of course it was. Just stay away from my things if you feel the beast coming on, eh?"

Kor: "Why back to Skyrim? What brought this on?"
Hildegard: "Just for a few weeks."
Kor: "Matron willing, I'll join you. But why?"
Hildegard: "I want to hunt like I am now. Not by instinct. I want everyone to know I am a part of this family."
Kor: "Of course, Hilde. We'll take the contract together."