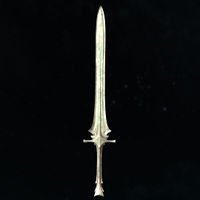 "He doesn't even carry a cane! More the giant, bone-cleaving sword type of Prince." —Sheogorath[1]

The Sword of Jyggalag is a Daedric artifact created by Jyggalag, the Daedric Prince of Order. It takes the form of a giant claymore of perfect symmetry, made of a silver crystalline material that is similar to the longswords wielded by the Knights of Order. It has been compared to the Staff of Sheogorath,[1] although it is unknown if the sword holds as much symbolic power. It has a unique enchantment that allows those that gaze upon its edge to see the past, present, and future flow as one.[2]

The sword was originally created and wielded by Jyggalag himself. Despite his absence and obscurity, replicas of the sword were in existence circa 2E 582.[3] During the Greymarch of 3E 433, Jyggalag used the sword in his final assault on the Palace of Sheogorath, where he was defeated by Sheogorath's mortal Champion. Free of his curse, Jyggalag departed the realm to roam the voids of Oblivion, and his sword was placed in the palace's throne room as a trophy.[4]

On the 2nd of First Seed, 4E 200, a Tamrielic mage named Thoron came into contact with a lump of Sheogorath-shaped amber, granting him a vision of the lands of Mania.[2] As he subsequently descended into manic insanity, Thoron began collecting items related to the Shivering Isles from all over Skyrim, hoping to use their connection with the realm to once again reach Mania.[2] In 4th of First Seed, 4E 200, Thoron set up a camp near Solitude's rock arch, but a dire situation would occur whilst he was trying to connect once again with Mania. He would accidently summon the powerful Golden Saint Staada, and thus was forced to flee. He relocated to Solitude's sewers, where he discovered a manifestation of the Shivering Isles had taken shape in the form of a Root Tunnel deep within the sewer system. With his new lair established, Thoron hired bandits to retrieve for him artifacts originating from the Isles.

Thoron's investments would pay off, as in the 15th of Midyear, 4E 201, the bandits had come into possession of the Sword of Jyggalag. From deep within the root tunnels, Thoron did the Sword's bidding, and cut a deeper wound between Tamriel and the Shivering Isles, allowing items such as madness ore and amber to appear all over the province in seemingly impossible locations.[8] The Sword ultimately tried to manipulate Thoron as its goal was the destruction of the Shivering Isles.[2] His ritual was stopped circa 4E 201 by the Last Dragonborn, who killed Thoron and removed the Sword from the heart of the burgeoning Root system.[9] Staada subsequently learned of the Dragonborn thwarting Thoron's machinations, and wrote to them to arrange a meeting.[10] She requested the item Thoron used as the focus of his rituals, although the details of this proposed exchange are unknown. Indeed, it is unknown if the Dragonborn traded the Sword (or a different item), or instead chose to bind and summon her using powerful Conjuration magic.[11]