Vaermina (also spelled Vaernima), called the Prince of Dreams and Nightmares, the Gifter, Lady of Nightmares,, Weaver of the Panoply, and the Dark Lady and known to the Khajiit as Varmiina, is a Daedric Prince whose sphere is the realm of dreams and nightmares, and from whose realm evil omens issue forth. She is considered one of the more "demonic" Daedra, in that she is destructive for the sake of causing destruction; her method being "torture". The Prince is served by various Daedra including scamps, clannfear, Dremora, and the powerful "Omens".

Vaermina's plane of Oblivion is Quagmire, described by observers as a "nightmarish land". It is said Vaermina hungers for the memories of mortals, collecting them from her citadel at the center of the realm, and leaves behind "visions of horror and despair". Every few minutes, reality shifts and becomes ever more horrifying: "[a] dark castle one moment, a den of ravening beasts the next, a moonlit swamp, a coffin where he was buried alive." It is not known what Vaermina does with these memories, but it is assumed to be malevolent.

Priests of Vaermina are said to be master alchemists, their highly-prized potions fetching handsome prices on the black market. Notable among these is a concoction known as "Vaermina's Torpor", which places the drinker in a state known as the "Dreamstride". Subjects are granted the ability to enter the dreams of others ("The Dreamstride" is also used to refer to Vaermina's realm) and travel distances in the real world. One seems to vanish when entering the Dreamstride, only to reappear in the location their dream-self was in when the effect wears off; subjects have been known to reappear thousands of miles away in minutes. However, the Dreamstride is not without risks, and death or disappearance remain very real possibilities.

Vaermina is said to be an enemy of Ebonarm, Boethiah, Peryite, and Hermaeus Mora, but an ally of Sanguine. Her summoning day coincides with the Merchants' Festival, the 10th of Sun's Height.

Varmiina, also titled the Queen of Nightmares and the Lost Daughter appears in some Khajiiti traditions as a dark spirit who tests Khajiit during their life. She was said to have been born from Fadomai's fears of losing her children, rather than from one of her litters. Varmiina was eventually killed by Azurah which lead to her only be able to haunt Khajiit during their dreams.[1]

Vigryl (also called Vir Gil)[2] is known as the God of the Sea and is worshiped in the Iliac Bay area.[3] 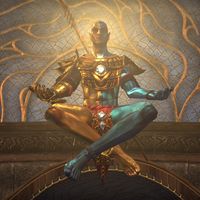 Lord Vivec in his temple around 2E 582

Vivec (also spelled Vivek), or Vehk, Warrior-Poet deity of the Dunmer and "vi" in the Almsivi, was the Guardian God-King of the holy land of Vvardenfell, and ever-vigilant protector from the dark gods of the Red Mountain, the gate to hell. Though some aspects of his past are blurred by time and questions surround some of his more controversial choices, Vivec has always represented the spirit and duality of the Dunmer people, which is reflected in his half-Dunmer, half-Chimer appearance. For hundreds if not thousands of years, he mostly resided at the pinnacle of his Palace in Vivec, his capital, which was visited by hundreds of pilgrims and tourists daily. He honorably guided and protected the Dunmer for thousands of years until his loss of divinity and disappearance near the end of the Third Era, a sacrifice he not only accepted, but helped to bring about. Following his disappearance and the collapse of the Tribunal Temple, he was renamed Saint Vivec by the New Temple and declared a member of the False Tribunal.