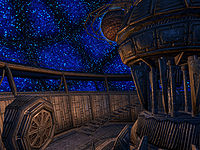 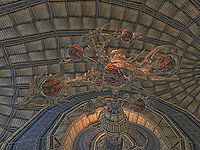 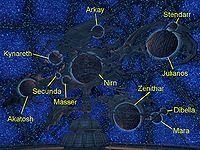 The names of the heavenly bodies around Nirn

The Orrery is an official download for Oblivion, adding a new quest to repair the Arcane University's Orrery. Restoring the Orrery grants you a greater power that will fortify one attribute while draining another. The particular power that you receive is based on the phases of the moons, Masser and Secunda.

Harness the power of the stars. Rebuild the defiled Orrery and unlock the secrets of this Mages Guild Inner Sanctum. —Former Official Summary
The Orrery Pack allows you to help the Mages Guild of Cyrodiil repair the Imperial Orrery, an ancient dwarven machine with mystical properties. Bandits have stolen a shipment of parts destined for the Arcane University; if you can return them, the Orrery will function once more. —Official Summary

This letter was originally displayed on the official obliviondownloads.com website, which has since become unavailable. The text serves to provide background and context for the events of the download.