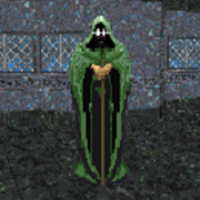 A Daedra Summoner of the Cabal of the Mages Guild

Although the act of summoning a Daedra Prince is no common service, it is one nonetheless. The only reason to summon a Daedra Prince is to gain possession of a certain artifact. Few can perform this service, therefore access is restricted. People of noble origin have the means to access a Daedra Summoner; it is rumored that every ruler has his own Daedra Summoner at court. Common people can access a Daedra Summoner only within the services of certain Factions. However this special service is restricted to high-ranking members within these factions and the cost are in most cases exorbitant. There are rumors, that certain Witch Covens can also summon a Daedra Prince for whoever has the required amount of gold.

Daedra Princes request a certain service from mortals that dare to appeal to them. If the mortal completes this duty to the satisfaction of the Daedra Prince, he or she might grant the petitioner possession of a legendary artifact.

There are three ways to summon a Daedra Prince:

Daedra can only be summoned at the Mages Guild or Temples on certain days (see Summoning Days). At witch covens, however, the situation is completely different. It seems that random chance alone determines which Daedra Prince will be summoned on that particular day. You can, of course, simply visit the coven every day until they offer to summon the Daedra Prince you wish to speak to.

The only exception is Hircine, who can be summoned every day by the Glenmoril Witches. He cannot be summoned by other Daedra Summoners, even on his Summoning Day.

Although Sheogorath has his own Summoning Day, there is a 5% chance (or 15% if thunderstorm) on every other Summoning Day that he shows up instead of the Daedra Prince who would normally appear.

Trying to summon a Daedra Prince after you've already done so once will bring up a dialogue where the respective Daedra Prince refuses to interact with you.

This means a having a reputation of 100 with the summoner's faction will lower the cost of a summoning session to 50% of the base price.

Regarding this formula, the best choice for a summoner (if available to you) would be the Daedra Summoner of the Mages Guild, because:

Chances for a Successful SummoningEdit

According to The Daggerfall Chronicles, the maximum chance for a successful summoning is 95%. The remaining 5% is for Sheogorath's chance of appearing, which rises to 15% during thunderstorms.

If a summoning is successful but you declines the Daedra Prince's quest, waves of one of the five daedric foes will begin appearing to punish you for three in-game hours. After this period, they will return to Oblivion.

When a summoning at a witch coven is unsuccessful, the daedric foes will also appear. At guilds, they will not. If a quest for a Daedra Prince is successfully completed, you will gain +5 reputation with the witch coven who summoned the Prince and +2 reputation with its allied factions, if any exist. Considering all these factors and circumstances, it is wise to always save the game before attempting a Daedra Summoning.

Note: Gameplay experiences indicate that the daedric punishment feature only has a marginal chance of actually occurring.

The summoning days are hinted at in the book Invocation of Azura.