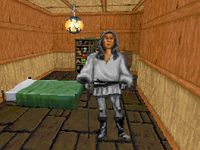 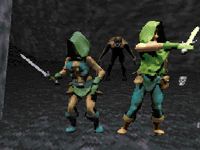 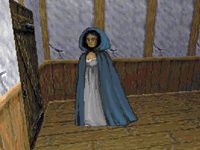 Hircine appears and starts speaking to the player:

"If you would not mind doing a small favor for me, I can put in your possession a most excellent reward, The Hircine Ring. I have a child, apparently miserable with all the blessings I have given him, who needs ... what is the euphemism? To be taught a lesson? A very serious lesson. Does this sound like an agreeable contract, (player's guild rank/player's name)?"

"Ah, good. This child of mine is a wereboar who has made his den in a place called (dungeon). You should have no trouble finding it. After you have put him out of his obvious misery, which should not take more than (time limit) days, go to a place called (building) in (town) and look for a person named (worshiper's name). If you arrive there within (time limit) days from now with the wereboar dead, (he/she) will give you The Hircine Ring. A pleasure doing business with you, (player's guild rank/player's name). Good luck and farewell."

"Seldom am I summoned, even rarer are the occasions when I am free to answer a summonings [sic]. To be perfectly blunt, this was a waste of my very precious time."

Travel to the dungeon Hircine named and enter it. Once inside, find and kill the wereboar. There may be more than one wereboar inside the dungeon, but once you have slain the target creature a message appears:

The wereboar is dead, as you promised Daedra Prince Hircine.

Once the creature is dead, meet Hircine's worshiper in the town and building the Daedra Prince named and you will receive your reward.

Speak to Hircine's worshipper to report your success and you will hear:

"Hello, (player's first name). You made it. Hircine's impressed with you, which is no small accomplishment. Here's The Hircine Ring you were promised. Take care."

If you successfully complete the Daedra Prince's task and receive the artifact, you will gain reputation according to the table below.

If you fail the quest, you will lose reputation according to the table below.

If you ask an NPC about The Hircine Ring, you may hear: