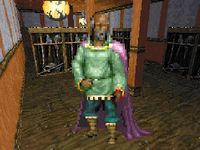 Speak to a noble, who says:

"I need someone to bring a certain item to a contact of mine in (town). You will receive an item in return. If you bring that item back to me, I will happy to reward you with (random gold) gold pieces. Do you agree?"

The noble goes on:

"Very good. Take this bar of gold and bring it to a certain (contact's description) called (contact's name) in a place called (building) in (town). You will need to move quickly. (Contact's name) isn't in the habit of waiting around for laggard couriers. Very well, good luck to you, (player's first name). I will expect you back in (time limit) days."

"No? What a shame. I was prepared to be quite generous." 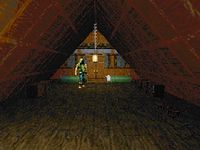 The mysterious leader of the gang of thieves 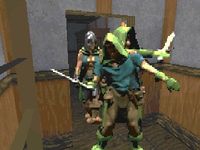 Travel to the town the noble mentioned and meet your contact there. The building may be locked depending on what type it is and the time, so plan accordingly. Find the contact inside and hand over the gold bar. The contact will say:

"Marvelous, (player's first name). I do adore gold, don't you? Well, you'll get your share once you've returned this particular (magical item) to (noble's name). I hope you remember the way back to (noble's town)."

Receive a magical item in exchange and make your way back to the noble. Shortly after you have obtained the item, you will be attacked by some nightblades. As you strike the first opponent, a message appears:

As you fend off your assailant, you feel something brush against you from behind. You glimpse a figure running away before your attention is forcibly returned to keeping yourself alive.

Deal with any attacking nightblades and search the corpses until you find one carrying the following note:

The mark is a (player's race) named (player's name),
who will pick up a (magical item) from
(building). Bring the (magical item)
to me. The courier is of no importance,
dead or alive.

Ask around about the name on the note until you are given the name of a town. Travel there and obtain the location of the building where the ringleader of the gang is staying. Gain entrance to the locked building and confront the thief within, who says:

"(Oath), who are you and how did you get in here?! You must be that damned courier of (quest giver)'s! I knew I should have had (thief's name) kill you. My soft heart, always getting me in trouble ... Guards! Kill this intruder!!"

A group of rogues will appear for reinforcement once you attack their leader. Take care of your opponents and loot the ringleader's corpse for the stolen item. Additionally, there is a 25% chance the ringleader carries a parchment (see bugs); reading this gives the message:

The parchment describes the location of the Coven of the Tide in Totambu, whatever that is.

Return the stolen magical item to the Noble to receive a generous reward including another magical item.

If you bring back the magical item in time, the noble will be pleased and say:

"Excellent, (player's first name), you've returned with my enchanted (magical item) as promised. I heard that you ran into some trouble on the road, and I was beginning to worry that you were lost to us. As a token of my appreciation for a job well done, I am adding a magic (another magical item) to the (random gold) gold I originally promised. I am sure we will make use of your services again in the near future. Thank you."

If the gold brick or the magical item are not delivered to their destinations in time, you will lose reputation as shown in the table below.

If you attack the thief in his hideout you will lose reputation as seen below.