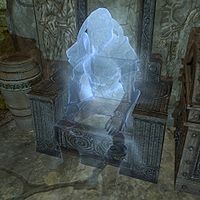 Kvenel the Tongue is an ancient Nord hero who died long ago and was buried in Volunruud. He now lives in his burial chamber as a ghost. For historical information, see the lore article.

Kvenel dual-wields two unique items: Eduj, a sword, and Okin, an axe; both are enchanted with frost damage. He also has two backup weapons, which are leveled but not necessarily of maximum quality. The rest of his equipment is a variant of ancient Nord steel, which cannot be looted and is considerably stronger than the obtainable kind.

As a ghost, he has an additional 100% frost resistance on top of his Nord ability, and is also completely immune to poison. He is, however, vulnerable to paralysis.