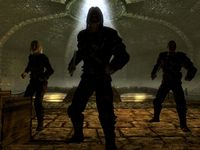 You're expected in the flagon

Head to the Ragged Flagon through The Ratway. Meet Karliah after entering through the door to the Ragged Flagon and follow her as she leads you to the Cistern, where Brynjolf, Delvin and Vex are waiting with knives drawn. Karliah pleads clemency and hands over the journal you translated in the previous quest as proof of her innocence. Brynjolf is shocked at the revelations contained within and determines that they must open the vault to see the truth. Follow them as they head to the vault and watch as Delvin and Brynjolf use their respective keys to open it. As soon as the doors open, Brynjolf will let out a cry of horror at seeing the place completely empty; not a single gold coin is left. While Delvin is distraught at seeing their fortune gone, Vex's reaction is more violent; she pulls her dagger out and vows to kill their treacherous Guildmaster immediately. Brynjolf manages to calm the situation and asks to talk to you after assigning the other two to keep an eye out for Mercer. Tell him everything and he'll instruct you to break into Mercer's home to look for clues. However, the place is guarded by a Nord lout named Vald who is quite insistent on keeping people out. Brynjolf suggests you speak to Vex about him, since she was at one point intimately acquainted with Vald. Vex suggests the best course of action would be to erase his debt with Maven Black-Briar or run him through and take what you need off his body. You must pass a hard-level Speech check to persuade him to give you the key.

If you don't wish to kill Vald yourself, and don't want to pay the debt, you can sneak to the back of the house and shoot the ramp contraption. Vald will become hostile and chase after you. Lead him to the marketplace or any other area with guards and they will kill Vald. Loot his body and take the key. It is also possible to climb up the exterior of the Temple of Mara, by jumping onto the braziers and from there scaling the roof. From there, you can use Whirlwind Sprint to reach the balcony without ever interacting with Vald.

Get a good vantage of the mechanism under the ramp and attack it using a ranged weapon (magic, bows, and shouts all work). The ramp will crash down, providing access to the second floor and the rest of the house.

The first room is unguarded. The next has a single guard who should be facing the west wall, allowing you to sneak past easily. The stairs down are to the northwest. At the bottom, another guard will be patrolling.

When you reach the bottom of the stairs, immediately face east and there will be closed doors. Head through them. On the northeastern corner to the barred front door you'll see a Suspicious Cabinet. Open it and then open the false back panel. Inside is a stairway down to the cellar, which leads to an underground system of tunnels.

The hallway after the trap room has a pressure plate trap right around the corner that will launch a series of darts in front of the plate. Past this trap there is a chest on the right, which was on the other side of the metal gate at the beginning.

Following the hallway, you come to a hallway filled with timed pendulum blades and battering rams. Sprinting is a useful way to get past them. Once at the other end, head down the ramp and stop at the closed door. There is a dart trap trigger on the left side of the door. On the other side of the door are, among other things, Mercer's plans, a note titled Many Thanks, a copy of the Sneak skill book The Red Kitchen Reader, and Chillrend in a case. On the desk is the Bust of the Gray Fox, which can be sold to Delvin as part of The Litany of Larceny quest. There is also a stash of jewels hidden in the bowl on Mercer's desk.

Continue along the path until you reach the entrance to the Ratway Vaults. Fall down the hole (you may be attacked by some Vagrants and Lowlifes even if you had previously cleared the Ratway) and turn right to reach the Ragged Flagon. Return to Brynjolf and hand over the plans.

Notes
* Any text displayed in angle brackets (e.g., <Alias=LocationHold>) is dynamically set by the Radiant Quest system, and will be filled in with the appropriate word(s) when seen in game.
Retrieved from "https://en.uesp.net/w/index.php?title=Skyrim:The_Pursuit&oldid=2390459"