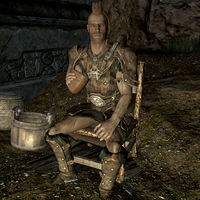 Dryston is a Breton barbarian working for the Forsworn. During the related quest he tries to beat you up after you nose around too much. He will arrogantly tell you, "You've been digging around where you don't belong. It's time you learned a lesson." If you ask him about who he is working for he will simply reply with, "Someone who doesn't like you asking questions." to avoid telling you the truth. If you try to act tough and say that you don't listen to threats he will respond by saying, "You'll listen to this." before attacking you.

After you beat him in a brawl on the streets he will fall to the ground while gasping for air and mutter, "Ugh. You mangy piece of pit-bait!" You can then freely ask him for answers and, being in no position to argue, he will quickly tell you, "I was sent by Nepos the Nose. The old man hands out the orders. He told me to make sure you didn't get in the way. That's all I know, I swear!"

After receiving his beating, Dryston will take up residence in Weylin's old room in The Warrens, where he will remain for the rest of the game, offering no unique dialogue. The room itself will still be identified as Weylin's room, and Weylin's room key will unlock the door as normal.

Dryston wears a set of leather armor with a matching pair of boots. He is equipped with an iron dagger and carries a selection of lower-class loot and gold.

This Skyrim-related article is a stub. You can help by expanding it.
Retrieved from "https://en.m.uesp.net/w/index.php?title=Skyrim:Dryston&oldid=1945992"
Categories:
Hidden categories: