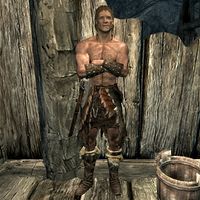 The male Redwater Lookout is a Nord bandit found outside the front of Redwater Den, a drug den for Redwater skooma. 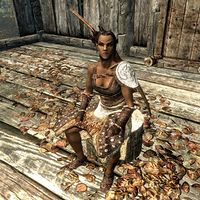 The female Redwater Lookout is a bandit archer who guards the back of Redwater Den's exterior, usually sitting on a stump in front of the fireplace near the trapdoor. She can appear as either a Redguard or a Bosmer.

This Skyrim-related article is a stub. You can help by expanding it.
Retrieved from "https://en.uesp.net/w/index.php?title=Skyrim:Redwater_Lookout&oldid=1406318"
Last edited on 23 November 2014, at 16:01