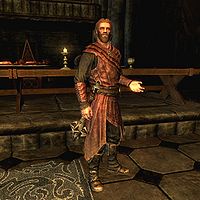 Orthjolf is a Nord vampire in Volkihar Keep. Not unlike many other Nords, he believes strength is more important than magic and has a disdain towards elves. He and Vingalmo are rivals, and can often be found arguing. He aspires to become lord of the Volkihar vampires, and will send Stalf to retrieve the newly purified Bloodstone Chalice from you during The Bloodstone Chalice. After you join the vampires, he will warn you not to trust a word coming out of Vingalmo's mouth.

Orthjolf wears a set of red colored vampire armor with a matching pair of boots. He is equipped with a leveled one-handed weapon which can be up to elven quality. He carries random leveled bandit loot, as well as a 25% chance of carrying 1-9 gold.

When you first arrive in Castle Volkihar with Serana and the Elder Scroll, Orthjolf will murmur excitedly: "The scroll!"

If you are an elf, Orthjolf will say the following when first spoken to:

"Another elf, I see. I'm sure Vingalmo will be sizing you up as we speak, trying to figure if you're friend or foe. He'll tell you what a monster I am, that I can't be trusted... You mark my words, it's him you need to worry about. If it'll get him closer to being in charge, he'll slit your throat without a moment's thought."
You don't trust Vingalmo?
"No, and if you're smart you won't either. I know he's one of your kind and all, but he's only looking out for himself.
You'll think you're best of friends, until you find his fangs in your neck."

If you are not at member of the elven races, Orthjolf will instead greet you with:

"Good to see a new face here. Especially one that isn't attached to an elf. Between you and me, there's too many of them. Can't trust the lot of them; never could. Want my advice? Avoid getting wrapped up in Vingalmo's schemes. He's after the throne, and he'll kill anyone that gets in his way."
You don't trust Vingalmo?
"Of course not. He's an elf, isn't he? He'll cozy up to you, use his honeyed words to get you to lower your guard, then use you and throw you away when he's done with you. You watch yourself around him."

If you approach him in Vampire Lord form, Orthjolf will say:

"You realize that doesn't impress anyone here."

Orthjolf will sometimes have conversations with Vingalmo. He occasionally starts off on a bad note by mocking Vingalmo's habits.

Orthjolf: "Well, well. Where have you been, Vingalmo? Nose stuck in a book all day?"
Vingalmo: "Orthjolf, I'm surprised! I didn't even think you knew what a book was, my brutish friend."
Orthjolf: "You'd do well to watch that tongue, elf."
Vingalmo: "And you'd do well to be more careful of whom you engage in witty banter."

Orthjolf will occasionally take a jab at Vingalmo's apparent lack of punctuality.

Orthjolf "Surprised you weren't at the last meeting with our Lord, Vingalmo. Too busy plotting to overthrow him to show up?"
Vingalmo: "What? What meeting? I wasn't informed of any such thing!"
Orthjolf: "Oh I see. I just understand he'd sent for both of us. How awkward for you."