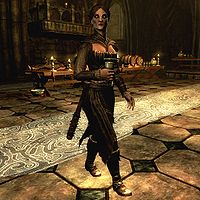 Salonia wears a set of black vampire armor with a matching pair of boots. She is equipped with a leveled one-handed weapon which can be up to elven quality. She carries random leveled bandit loot, as well as a 25% chance of carrying 1-9 gold.

During The Bloodstone Chalice, you will be sent to fill the eponymous chalice from the Bloodspring at Redwater Den. After doing so, Salonia and another vampire, Stalf, will appear. They will claim that Harkon sent them, though their dialogue will indicate that they were sent by Vingalmo and Orthjolf:

Salonia: "It's really too bad, you know. The little accident you had here, completely unexpected..."
Stalf: "Yeah, too bad. Lord Harkon's new favorite, dead so soon after joining the family."
Salonia: "We're just lucky I was here to return the Chalice to Vingalmo, so he could make sure Harkon gets it back."
Stalf: "Wait, what? That's not what we agreed. We take it back together."
Salonia: "Idiot. You didn't really think I'd let you walk out of here either, did you? Vingalmo wants you both dead."
Stalf: "Well that's just fine. Orthjolf told me to finish off anyone who got in the way."

They will become hostile at this point and attack you and each other.

This Skyrim-related article is a stub. You can help by expanding it.
Retrieved from "https://en.m.uesp.net/w/index.php?title=Skyrim:Salonia_Caelia&oldid=1912600"
Categories:
Hidden categories: