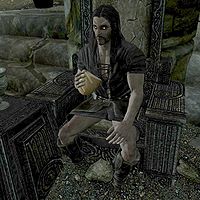 Venarus Vulpin is an Imperial vampire in Redwater Spring. He moved to Skyrim from Summerset Isle in search of the "Bloodspring of Lengeir's Feast", a fabled source of power for vampires that was believed to be in a ruin buried during the Second Era. He made his way from Alinor to Solitude by ship, and then ran into a female vampire in a local tavern who pointed him in the direction of the Rift.

After finding the Bloodspring in Redwater Spring, it turned out not to be everything he had hoped. The great power it grants only lasts a short while and besides weakening the body it is also very addictive. He then turned the place into a skooma den, mixing the addictive blood into the skooma to ensure a constant source of food.

He is hostile when you encounter him, and a powerful enemy, using mainly Destruction and Conjuration in combat. He carries a key to the wooden door at the end of the boss chamber, which leads to the Bloodspring.