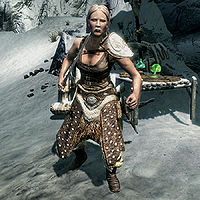 Spellswords are a group of conjurers found in Southfringe Sanctum led by Bashnag. They wear a leveled set of light armor, including the cuirass, boots, and a 50% chance of the gauntlets, all of which can be up to scaled in quality. They have a small chance of carrying some leveled potions and a gem along with a small amount of gold. In combat, they rely on a leveled one-handed weapon that can be up to elven in quality along with a small chance of carrying a leveled staff. Aside from these weapons, they can also cast a variety of spells in combat, including Frost Cloak, Healing, Ice Storm, Lightning Bolt, Oakflesh, and Reanimate Corpse.