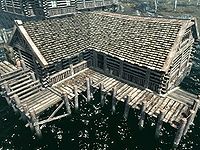 Riften Warehouse is a warehouse on Riften's docks, that is home to Riften's skooma dealer until you complete the relevant quest.

Located on the docks outside of Riften's walls, the warehouse is the base of operations of Riften's skooma dealer. The Jarl is unable to get rid of the dealer due to corrupt guards, but the player is able to take up a quest to get rid of them and discover where the skooma is coming from.

The warehouse is inaccessible before the quest: The Raid, as the door is locked and requires a key. Upon entering you will be spotted and will have to deal with the skooma dealer and his bodyguard. Once you've dealt with them, you can explore.

The whole of the warehouse appears disused, dusty with clutter scattered around the floors. The first room consists of many crates and sacks of foodstuffs and barrels - a couple of which contain ingredients - along with sets of shelves that have been knocked over. In the northeast corner is a doorway into an office area with a long wooden table and chair, with an iron dagger, a couple of ruined books, a bottle of Nord mead and a wooden plate containing three loose septims.

In the main room, there is a bottle of Nord mead and a bottle of wine on the set of shelves, with a second bottle of wine on the ground beside it. To the left of the shelves, against the south wall, is a shelf holding more sacks. Next to the eastern wall is a pickaxe, while in the northeastern corner next to a couple of food barrels is a flight of stairs leading down to the cellar. The cellar is similar to the room above with crates, barrels, and sacks everywhere. There is a pair of locked double doors to the east that require a key, which can be retrieved from the body of Sarthis Idren.

Behind the doors is a small room that seems to be the base of operations for Sarthis, the skooma dealer. There is a set of shelves opposite the doors against the east wall that holds five bowls of moon sugar and six bottles of skooma. At the north end of the room is a long wooden table and chair, with a bottle of wine, another bowl of moon sugar, and two more bottles of skooma. There is also a satchel on top. Inside the satchel is a note that is needed for the relevant quest. There is another set of shelves leaning back against the wall holding two pieces of firewood and, on top of the unit, a mammoth tusk. Around the cellar are bottles of both Nord mead and alto wine.