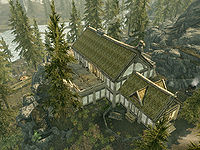 Lakeview Manor is a piece of property in Falkreath Hold, north of Pinewatch. It is one of three potential homes available with the Hearthfire add-on. 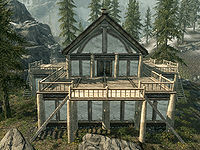 Back view of the house

After installing Hearthfire, you may purchase this plot of land at the Jarl's Longhouse in Falkreath. If Siddgeir is still the Jarl, speak with his steward, Nenya; if the Stormcloaks have control of the hold, speak with Tekla, steward to the new Jarl, Dengeir of Stuhn. You will have to complete the quest Kill the Bandit Leader before being allowed to purchase land if Siddgeir is Jarl. If you are level 9, then a letter from the Jarl of Falkreath may arrive; reading it gives you an objective to talk to the Jarl, as a part of the Falkreath version of Build Your Own Home. However, if this has not happened yet, then Siddgeir will require you to complete his version of Rare Gifts before giving the Bandit Leader quest, and the dialogue option to start this quest will not appear if another version of the quest is active. If Dengeir is Jarl, then he will allow you to purchase property out of thanks for your help installing him, whether this was because of events in Season Unending or because you conquered Falkreath for the Stormcloaks. When you ask the steward if you can buy a house in the hold, you will be told that there are no houses for sale at that time, but a new plot of land is available. It will cost 5,000 gold.

Your new property, Lakeview Manor, will be marked as an undiscovered location on your map, located between Falkreath and Riverwood. When you arrive on your new plot of land, you will find a drafting table, carpenter's bench, anvil, and chest directly west of the housebuilding area, sheltered by a small cliff. Follow that same cliff face a few steps north to find the stone quarry. There is a clay deposit, wood chopping block and log pile directly west from the carpenter's workbench, on the other side of the dirt path.

You can begin building your home immediately, with materials provided in the chest when you first arrive. A unique feature at Lakeview Manor is that you have the option to build an apiary. It comes with one piece of honeycomb and some bees. Bleak Falls Barrow can be seen from the north end of the property, beyond Lake Ilinalta.

Like the other player-built homes, you will have the option to expand onto your home with a Main Hall, cellar, and three wing additions. See this page for pages detailing the furnishing options in each part of your home.

Should you become a Thane of Falkreath, Rayya will become your housecarl. She will move to Lakeview Manor upon construction of the small house layout.

The apiary is the unique feature for this homestead. It is initially stocked with 1 Honeycomb and 5 Bees. When the apiary has been emptied, it will eventually be stocked again with these items. Because it respawns, it is not safe to store items in.