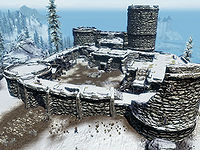 Fort Hraggstad is a medium-sized fort north of Dragon Bridge, initially occupied by bandits. The fort will be taken over by whoever wins the civil war, or by the Imperials if the player first clears it of bandits and/or completes the Joining the Legion quest (but see also bugs and page discussion).

The sizable courtyard and walls are patrolled by up to seven bandits. A forge is along the southwestern wall, with an unlocked chest to its left. On your right as you pass the arch into the courtyard is an empty stable, with several food barrels found around the courtyard. On top of the two intact towers are random, possibly enchanted bows and quivers of arrows on tables, with the top of the tallest tower also having a long bow.

As soon as you enter, unless your sneak skill is very high, you are likely to be confronted by a lone bandit in the first room, standing in front of the fireplace directly opposite the entrance. However, even the sounds from a loud battle with him are unlikely to reach the ears of the next bandit upstairs, so you can generally deal with the two bandits one at a time. To the left of the fireplace is a cupboard holding clutter, a garlic bulb in a wooden bowl, and three common books, while leaning against the fireplace is a woodcutter's axe. To the right of the fireplace is a doorway leading further into the fort, and in the northeast corner is a wooden table with iron armor, helmet, sword, and battleaxe all on top.

Through the doorway is a cart at the bottom of a flight of stairs, containing an iron shield, a long bow, iron gauntlets, and a potion of minor healing. Climbing the stairs leads to a large room, with a bandit leaning against the wall, and the bandit chief at the back of the room in an area being used as sleeping quarters. The front half of the room is being used for storage, with several food barrels under a wooden structure in the northwestern corner. On this structure is an adept-locked chest and a small wooden table holding three potions of minor healing and some foodstuffs. Against the north wall are two sets of shelves containing three bottles of alto wine, a bottle of wine, some food, a gourd, an iron sword, and eight common books. Opposite the shelves is another wooden structure, with a food barrel and a table holding a small mead barrel and three potatoes.

There is a raised section in the middle of the room with a small wooden table holding two bottles of wine. Against the south wall is a single bed and a dresser. On the dresser are three loose septims, a bulb of garlic, and some bread and cheese. In front of this is an end table with a gourd on top, and against the north wall is another single bed and another table with a leg of goat roast and a loaf of bread on top.

The western end of the room contains four more single beds, an unlocked chest, and a table holding a tactical map of Skyrim which the bandit chief was studying, a baked potato, a garlic bulb, a gourd, an iron helmet, and a copy of the Archery skill book The Gold Ribbon of Merit. Against the north wall, between two of the beds, is a cupboard holding an iron helmet. Between the other two beds against the southern wall are an end table and a table with a set of iron armor, iron gauntlets, and an iron mace on top, while leaning against the end table is an iron greatsword, with a pair of iron boots next to the nearest bed. None of the beds in the fort are owned.

Upon entering, you are in a room with a bandit roaming about and a second bandit sitting at a table to the left. On the table is a small coin purse and a satchel. There are a couple wooden benches and a set of shelves holding only clutter behind the table, with a knapsack on top of the shelves. Against the northeast wall, almost opposite the entrance, is a second set of shelves holding a woodcutter's axe, iron or banded iron armor, iron gauntlets, and an iron helmet. There is a door leading downstairs in the southeast corner.

At the bottom of the stairs is a room containing a set of shelves full of more clutter against the northeast wall, and a small wooden table in the southeast corner with a rock warbler egg on top. To the southwest are stairs down to the cells, which are guarded by another bandit. There are a total of seven cells, with four against the southwest wall, and three against the northeast wall. All of the cells are empty and unlocked. On your left is a table holding an iron battleaxe and a common book. Behind the table is a chair, and against the southeast wall is an unlocked chest to the right of two sets of shelves holding several pieces of bread and cheese as well as clutter.