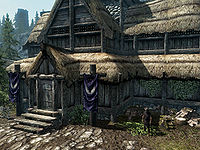 Jarl's Longhouse is the seat of Falkreath's government and home to its jarl. It is in the center of Falkreath, opposite Grave Concoctions to the east and opposite Falkreath Barracks to the north. 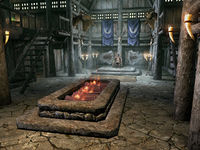 The main hall of the Jarl's Longhouse

Entry is made directly into the main room where the Jarl holds court. There is a long fire pit in the center of the room. Against the northwest and southeast walls are flights of stairs leading up to balconies and small bedrooms on the upper floor. Under the stairs there is a door leading to the Jarl's bedroom, to the southeast and a doorway to the northwest to the military advisor's room. The Jarl's throne is at the far end of the room on a raised platform.

The Jarl's bedroom consists of a king sized bed on a raised platform in the center of the room. Against the northeast wall is a long chest containing minor loot, two tall and a small wardrobe all containing fine clothes and footwear. There are a couple of goblets and a jug on the small wardrobe. Against the southeast wall are two locked display cases, the one on the left is expert-locked and contains books (see notes), while the one on the right is adept-locked and contains an amulet (see notes), and a gold necklace. In the southern corner are several sacks and a barrel containing food and a barrel containing ingredients. To the right of these, along the southwest wall are three more wardrobes containing fine clothes. In the western corner is a round wooden table and two chairs holding two bottles of wine, a bottle of alto wine and seven loose septims. Finally along the northwest wall is a wooden bench.

In the military advisor's room, the center of the room is taken over by a long wooden table with a large map of Skyrim showing the current state of the civil war. The military advisor spends all his waking hours poring over the map. On the southeast wall is a row of six weapon racks holding a variety of iron weapons, while in the southern corner there are a food barrel with a potion of plentiful stamina and a potion of minor healing on top. To the right, along the southwest wall are several straw bales with two practice dummies in front. In the western corner and continuing along the northwest wall there are more barrels. Along the northeast wall is a long wooden table, an unlocked chest containing minor loot and an owned cot, used by the advisor. On the table are four potions healing of differing strengths, a potion of minor stamina, an iron shield and a copy of the Block skill book Death Blow of Abernanit. Above the cot is a wall shelf holding a couple of loaves of bread, a boiled creme treat and seven bottles of Nord mead.

At the top of the stairs to the southeast is a balcony consisting of a round wooden table and two chairs against the southwest wall and a wooden bench opposite. The door to Nenya's bedroom is to the southwest. There is a long unlocked chest on the left as you enter, with a dresser to the northeast. On the dresser are two carrots, a boiled creme treat and a couple of pieces of cheese. In the southern corner is an owned single bed, with a set of shelves next to it in the western corner holding three green and two red apples, three bottles of Nord mead, two bottles of alto wine and a strongbox with a leveled lock. There are several sacks of food either side of these shelves.

Opposite, to the northwest is another balcony, which consists of an arcane enchanter built-in to a round wooden table in the northern corner and against the northeast wall is another round wooden table holding a bottle of alto wine, one of wine, two carrots and an apple pie. The door to the northwest leads to Helvard's bedroom. It consists of an owned single bed in the western corner with a small wardrobe holding a copy of The Wispmother and a steel war axe to the left. To the left when entering, on the southeast wall are two wall shelves holding four bottles of Nord mead, a medium coin purse, an empty lesser soul gem, an empty common soul gem and a copy of The Legend of Red Eagle which will initiate the relevant quest when read for the first time. Along the northwest wall is a long unlocked chest containing minor loot, with a food barrel in the corner to the right. Against the northeast wall is a dresser with a large coin purse and six loose septims. On the other side of the door is a set of shelves holding four bottles of wine, two bottles of alto wine two pieces of cheese and two potatoes.