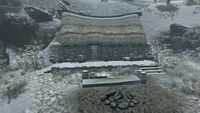 The Abandoned Lodge is an old, unused hunting lodge located northeast of Bloodskal Barrow and southwest of Frostmoon Crag. It is an abandoned shack built in the traditional Nordic style found in Skyrim. It contains little of importance except being used for the quest A New Source of Stalhrim. Prior to beginning the quest, the door is locked and requires a key; you will be unable to enter until that quest has at least started. It consists of one area: Abandoned Lodge. 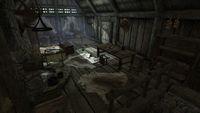 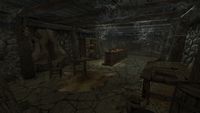 Outside of the lodge, there is nothing besides a few barrels, sacks, and bear traps. There are, however, two snow bear pelts and a knapsack along the eastern wall. Once the related quest has begun, four hostile Thalmor Soldiers, one of which is carrying the key to the Lodge, will be on guard outside. To the left of the entrance is a grindstone.

There is also little of interest on the first floor of the shack, save for a few empty wine bottles, two snow bear pelts, an empty chest at the foot of an unowned double bed, an unowned single bed, and some coins and a coin purse on a table with A Gentleman's Guide to Whiterun in the northeast corner next to a wardrobe and in the southwest corner, above a set of shelves are two hanging garlic braids.

The steps to the west lead to the basement where the kidnapped Baldor Iron-Shaper can be found. Also in the basement are three deer pelts, two more snow bear pelts, a few bear traps, five piles of salt, two pieces of bread, a garlic braid hanging from a wooden support on the ceiling, and a collection of alcohol at the bar along the north wall consisting of six bottles of Nord mead, two bottles of ale, and a single bottle of alto wine. Besides a locked chest along the eastern wall and a few sacks and barrels, little else can be found here.