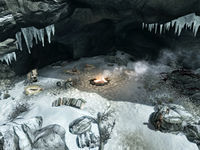 Frostmoon Crag is a spacious overhang of rock inhabited by werewolves.

When you first approach Frostmoon Crag, Rakel will speak to you. If you are a werewolf, she will then realize you are also a werewolf and Majni will tell you that their pack is the last full pack on Solstheim. If you talk to Majni, he will allow you to trade with him and he will have a range of unique rings for your beast form.

If you aren't a werewolf, the pack members will treat you as a trespasser and will turn hostile if you stay too long or draw your weapon near them.

The normal approach will be from the southwest climbing a slope between two rock formations. Partway up on your right are two silver ore veins. Further up the slope you will normally encounter Rakel sitting on a stone with a lit lantern behind her. 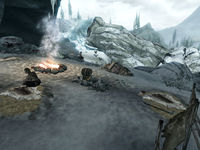 If you are a werewolf you will be welcomed and introduced to the pack leader Majni. Speaking to him will prompt him to tell you that he will sell you four rings blessed by Hircine that will help your hunt, as noted below. The camp is situated under an overhanging rock shelf facing southeast. It consists of a small campfire with some wooden plates containing venison, two raw rabbit legs, and a pheasant breast. To the southwest of the fire is a mead barrel with two bottles of ale, three bottles of Nord mead, and an elixir of enhanced stamina on the ground next to it. The ales, mead, and meat are free to take if you speak to Majni and trade with him. The elixir is owned, however, so taking it will count as stealing.

There are two tanning racks to the left of the camp. Akar isn't very sociable, but does tell you he is Majni's brother. Speaking to Hjordis, she will say she doesn't trust you much, but will still tell her story. She is not really part of the pack, as her own pack had been wiped out by werebears up north. Majni offered to help her reclaim her lands and so she stays with the Frostmoon Pack until that happens.

To the left of the tanning racks is a hay pile with a wooden plate containing a raw rabbit leg and venison. To the right of the tanning racks is an adept-locked chest with a medium coin purse beside it. In front of the chest are two more hay piles. At the east end of the camp is a large rock with blood splattered all around it. A bucket is next to the rock and a steel dagger lies on top of it. There is another hay pile between this and the fire. There are also a couple of snowberry plants growing under the overhang.

Blessed Rings of Hircine are available for purchase from Majni:

The Frostmoon pack themselves are the last true pack in Solstheim according to Majni, Hjordis originally had her own pack but it had been wiped out by Werebears, effectively making Majni's statement true. The pack seemed to have been led by Majni's family for years, as his father and grandfather were the previous alphas. Rakel's family was also a part of pack before they had died, meaning that pack is usually made up of the sons and daughters of the previous members, essentially making it somewhat of a familial pack. Despite this, the pack is not opposed to bringing in others from the outside into the pack such as Hjordis. They also greet other werewolves warmly, so long as they respect their law.

The pack fully embraces their lycanthropy and even worships Hircine, referring to him as "Lord" Hircine. They prefer to stay out in the wilderness rather live in a city, as Rakel described it as living how they want to and being free to hunt. While not immediately hostile to outsiders, they prefer to keep non-werewolf outsiders away from their camp and will give them warning first, showing that they maintain some humanity and restraint. The pack keeps four rings blessed by their patron with them though Majni is willing to sell them to a werewolf that has Hircine's favor, which he is somehow able to sense.