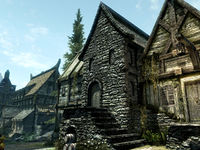 Evette San's House is the home of Evette and Octieve San in Solitude. It is located beside Addvar's House, opposite the bottom door to Proudspire Manor.

* This person only sells goods at the market. 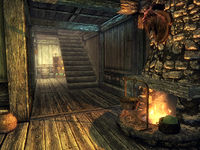 The interior of Evette San's house

Upon entering there is a cupboard on your right holding an iron helmet and a couple of sacks. On your left against the northeast wall is a small set of shelves holding a horker tusk, a cave bear pelt, a red mountain flower, and a basket holding two bunches of lavender. To the right is a barrel and basket containing foodstuffs. On top of the barrel are six iron ingots. Against an interior half-height wall is a small wooden table and two chairs. On the table are two portions of grilled leeks, two seared slaughterfish, a loaf of bread, an eidar cheese wedge, and a garlic bulb. Over the table are racks holding four rabbits and three salmon.

Past the interior wall, against the northwest wall, is a fireplace with a cooking pot in front and a cabbage in a cast iron pot on the hearth. Opposite against the southeast wall is a long table with various cheese, several loaves of bread, a couple of potatoes, a baked potato, a raw rabbit leg, a portion of grilled leeks, a salmon steak, a seared slaughterfish steak and a bottle of alto wine. Under the table is an open crate containing a sample of fly amanita, a gourd, a rock warbler egg and an orange dartwing. To the right is a second open crate containing vegetables.

To the southwest is the rest of the house, including stairs up to the top floor. On the left is a bedroom with a single bed in the southern corner with an end table to the right and a couple of sacks at the end of the bed. Against the southeast wall is a wooden bench and against the northwest wall a small set of shelves holding a woodcutter's axe, two bottles of Nord mead, a bottle of wine, and a mead barrel.

Back out in the corridor, to the left of the staircase to the rear of the house is a storage area with two cupboards. One holds two sweet rolls, a bottle of alto wine, an eidar cheese wedge, a sliced eidar cheese, a goat cheese wheel, four tomatoes, several loaves of bread, and a haunch of venison. The other holds a knapsack and an iron mace. Between them are several barrels of foodstuffs. There are also two sets of shelves under the stairs which hold various cheese wheels, cabbages, potatoes, a potion of regeneration, loaves of bread, two sheaves of wheat, a bunch of tundra cotton and a copy of Songs of the Return, Vol 19. Hanging from a rack beside a cupboard are three garlic braids.

At the top of the stairs is a wooden bench. In the southern corner is a table holding a loaf of bread, with a cupboard to the left of this holding another knapsack and iron mace. Continuing along the southeast wall is another wooden bench and a stack of barrels all containing foodstuffs. Against the northwest wall is a single bed with an end table holding a bunch of tundra cotton to the left of it. Against a railing to the northeast are two unlocked chests.