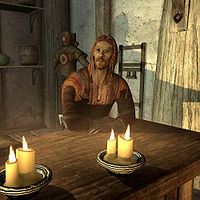 Elrindir wears a set of merchant clothes and a pair of boots. He is equipped with a steel war axe and a long bow supplemented by twenty steel arrows, and carries a selection of common items and gold.

When asked about the name of the inn, he will gladly explain: "Yes, I hear that question often. My brother Anoriath and I came up with it one night after consuming... rather too much mead. After our drinks, we went out for a moonlight hunt. We got separated, and in his drunken state my brother mistook me for a deer. He shot an arrow that pierced my... well, my rump. After such a memorable adventure, we knew we had the name for our shop." When asked about work, he will readily point you to a few places in Whiterun: "Try Hulda, the innkeeper at the Bannered Mare. It's just up the road, near the market. You should check in at Dragonsreach, too. There's so much going on these days, the Jarl or his Steward might have need of help."

However, if you chose to kill Anoriath for the Dark Brotherhood, even if you weren't detected, Elrindir will have a negative disposition towards you.

Elrindir can be seen having random conversations with his brother Anoriath, as outlined below:

Anoriath: "I've been thinking of hunting out beyond the boundaries of Whiterun hold."
Elrindir: "Again? You just had an 'extended hunt' last month. To the Pine Forest, wasn't it."
Anoriath: "That was three days. I'm thinking more like three weeks."
Elrindir: "Three weeks? You're mad! You can't keep the stand closed for that long!"
Anoriath: "Why not? Business has been terrible. Most folk would rather hunt their own meat than buy ours."
Elrindir: "Nonsense. That's just an excuse for you to avoid working, and 'commune with the greenwood like our fathers of old' and blah blah."
Anoriath: "Congratulations, brother. You've been living in Skyrim so long, you've become a Nord."
Elrindir: "At least the Nords don't shirk their responsibilities."

Elrindir: "Our stock of arrows is running a bit low."
Anoriath: "All right. I'll fletch some more when I get the time."
Elrindir: "Good. I'll do the same. We've still got plenty of shafts from that Riverwood shipment."

Anoriath: "It's been two months, and no word from father."
Elrindir: "Don't worry, brother. I'm sure he's fine. We've waited longer before receiving a letter."
Anoriath: "Might be worth riding out to Solitude, see if a messenger ship's come in."
Elrindir: "If it'll put your mind at ease, then I agree. But not now, all right? We need the business from the stand."