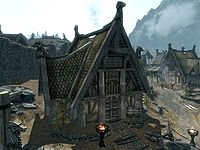 The Drunken Huntsman is a tavern and hunting supply store in Whiterun. It is located across the street from Breezehome.

Elrindir tends the counter, buying and selling weapons, armor, food, and miscellaneous items. It consists of one area only, The Drunken Huntsman.

NOTE: Like all other stores, The Drunken Huntsman has a number of fixed wares on display scattered around the main trading room. These can be bought from Elrindir and will disappear from the room when purchased. For a list of these special items, see this section.

* This person only sells goods at his market stall in the Plains District. 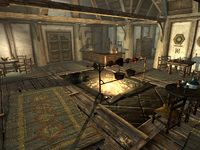 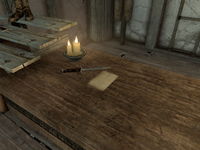 There are two entrances to the Drunken Huntsman, although both of them will land you in the taproom. Elrindir stands behind his counter in the western corner, providing his services around the clock. Hidden underneath the counter is a copy of the Archery skill book The Black Arrow, v2. Behind the counter is also a small storage room with a clothes wardrobe and a food barrel. A special fish barrel holds a variety of fish. If the Civil War Champions Creation is installed and you haven't yet joined either the Stormcloaks or the Legion, a note named Battle of Champions will appear on the counter, and you will be directed to read it to start the related quest.

Adjacent to the desk stand small tables for the regulars, with a honey nut treat, two loaves of bread and a bottle of wine. In the alcove sits Jenassa, a Dunmer mercenary who can be recruited as a follower for 500 gold. Her table has a bottle of ale and a gourd in a bowl. In the center of the room are two cooking spits dangling over a burning fire and along the northwestern wall is another table for customers, with a salmon steak, an apple pie, a bottle of nord mead and a bottle of wine. Olfrid Battle-Born will often sit at this table and enjoy his meals. Another small table stands near the cooking spits with a bottle of ale. Underneath the ladder leading to the guest room on the second floor, sits an alto wine and, on a food barrel, two bottles of ale.

The northern door leads to Anoriath's bedroom, with two owned beds. The bed to the northwest has a food sack underneath it and a non-respawning unlocked chest containing leveled items at the bedhead. The business ledger of the Huntsman can be found atop a dresser, right next to a locked strongbox.

The second floor consists of one bedroom reserved for regulars Nazeem and his wife Ahlam, both of them sleeping there every night despite owning Chillfurrow Farm outside of town. At the foot of the owned double bed stands a respawning unlocked chest with gold and the wardrobe contains cheap clothing. Two end tables with clutter stands on either side of the bed, one with a copy of The Third Era Timeline on top, the other with a red apple and a bottle of alto wine.

The following items are sitting out in the store, for example on the store counters. They can be purchased from the merchant, or can be stolen. They respawn after ten days.

This is the merchandise found in the Drunken Huntsman's merchant chest. These items are only available if purchased from the merchant; they cannot be pickpocketed or stolen. They are restocked every two days.