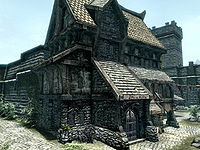 Bits and Pieces is the general goods store in Solitude run by Sayma.

It is next door to Radiant Raiment, on the corner by the market square. It contains only one zone, the interior.

The entrance leads directly into the shop, with a wooden bench and small round table on the left. The counter is at the far end of the room in front of the south wall. All of the items on display around the shop are Displayed Merchandise, with the exception of any items in containers or in the display cabinets, the herbs hanging from the ceiling, a loose septim under the counter, and another loose septim on the shelves behind the counter. The herbs hanging from the ceiling are a total of seven garlic braids, and three bunches of dried elves ear. Against the west wall is an expert-locked display cabinet containing a Dwarven dagger, a steel dagger and a leveled warhammer. There is a second expert-locked display cabinet containing a leveled greatsword (up to Daedric) (see bugs) and a leveled dagger. There is a chair between these two cabinets, where you will often find Sayma sitting upon entering the store. There is a central pillar supporting the vaunted ceiling and in the northwestern corner is a cooking fire at eye level with an empty metal pot in front of it and two more hanging above it inside, with a set of double doors leading to the residence.

Through the doors into the residence there is a wooden bench under two wall shelves on the left, on the south wall, with a couple of pieces of cheese on them and a common book on the bench. In the northeastern corner is a cupboard holding two sweet rolls, a bowl containing tomatoes, a haunch of raw venison, three loaves of bread and several pieces of cheese, with a wall shelf on the east wall to the right of it holding crockery. To the left of the cupboard, against the north wall, is a bookcase holding six common books, a flute and a potion of health, while in the northwestern corner is a long wooden table and two chairs, with a potion of regeneration, a bunch of tundra cotton, a baked potato, a salmon steak, a seared slaughterfish, a loaf of bread, a couple of wheels of cheese and two loose septims on top. To the left of this, along the west wall, is a wooden bench with a small unit holding a bottle of alto wine separating the table and bench. To the south is a stairwell with a flight up to the top floor and a flight down to the cellar.

Halfway up there is a large vase with a snowberry bush planted in it. At the top of the stairs is a L-shaped balcony with two doors off of it on the west wall. In front of you is a small seating area with a low chair, square wooden table and small round table in the corner with an iron dagger on top. On the square table is a plate of bread and cheese with a bottle of wine and a goblet. Around the corner is a narrow table with a bowl of bread and a plate with two tomatoes and an eidar cheese wedge on top. Above this is a wall shelf holding a bunch of elves ear. At the northern end of the balcony is a bookcase holding eleven common books, a potion of health and a flute, with a drum beside it and a chair in front.

The second door leads to another bedroom with a single bed in the southeastern corner, and small square table beside it with three loose septims on top. At the foot of the bed is another open crate containing a bunch of tundra cotton. To the right of the bed, against the south wall is a set of shelves holding three iron ingots, a bunch of lavender, with a potion of regeneration on top and a pair of iron boots beside it. Against the north wall is a small wardrobe, with a tall one against the west wall to the left. Opposite the door is a small cupboard containing clutter and with a narrow table to the left, behind the door. On this is an iron dagger and a bowl containing a bunch of tundra cotton and above is a wall shelf holding a set of clothes.

Descending to the cellar leads to a storage area with food barrels, an archery target with a square wooden table with a set of banded iron armor and a banded iron shield on top in the northwestern corner, while in the southeastern corner is a square wooden table with a goat hide (see bugs) on it and a cupboard with a couple of loaves of bread, several pieces of cheese and a rock warbler egg on the shelves and an iron sword on top. To the left along the east wall is an unlocked chest containing leveled items.

This is the merchandise found in Bits and Pieces' merchant chest. These items are only available if purchased from the merchant; they cannot be pickpocketed or stolen. They are restocked every two days.