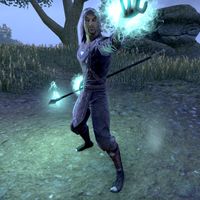 Necromancers are a class of hostile humanoid NPCs that attack using necromantic magic and summoning abilities. They are usually equipped with a staff that glows with green fire.

The necromancer often begins combat by summoning a zombie, bloodfiend, bloodfiend reaver, or a skeleton. If the summoned creature killed, another one will be summoned to replace it. The summon scales with the difficulty, faction, and location of the summoner. Necromancers are vulnerable while a summon is active.[1]

The necromancer channels a buff on a nearby undead (eg. skeletons, zombies, and even Bone Colossi and vampires) that increases the Physical and Spell resistance of the target.[1] This spell appears as a green glow around the hands of the buffed enemy as well as those of the necromancer. This spell can be interrupted to knock the enemy off balance.