A heavy sack can spawn in the silt across the river from the center of the Redoubt, to the north. mudcrabs scurry along the river bank. If you head north from the grey shoreline, cross the road north of it, then head a short ways west, you'll come across a small cave with a sack inside. A chest can spawn in this little nook.

A Thieves Trove is located at the beginning of the path leading into the ruins, upon a ledge to the left of the first flight of stairs. A chest is located to the left just up the first flight of stairs, next to a wooden shelter containing a mortar and pestle. If you head up the path, you'll find another wooden shelter near the stone walls of the redoubt containing a cooking fire.

There is a heavy sack in the western portion of the redoubt, just past the first path. It's next to a wooden shelter on the left side of the path, next to a stack of thick fur pelts. If you head south down this road and take a right turn at the intersection, you'll come across a stone canal where a waterfall pours down. A copy of Werewolves: Long-Suffering Guardians is sitting next to a backpack between two bedrolls here. A cooking fire is sat beneath a shelter along the water's edge. Another cooking fire is at the end of this stone path, beneath a large trellis.

If you head east, you'll come upon an archery range. Pentarch Draljura is speaking to a werewolf here. A letter addressed to the pentarch sits on a nearby bench during the related quest. There is a chest in the southern corner of the archery range. A heavy sack is under the wooden shelter near the chest. The path to the north leads to a set of stairs that allows you to climb into one of the stone canals. If you head up the stairs to the south, you'll find an archway leading to the rest of the ruins and a path leading east. Heading east, you'll come across more of the Gray Host's camp. There are wooden platforms above the camp, connected by plank bridges. A thieves trove is sitting at the northern end of the platform on the west side of the camp. A water skin is also underneath the lowest bridge to the west. 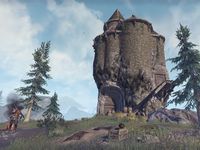 If you head south from the archery range, you can continue climbing up Lost Valley Redoubt. When you pass through the doorway, you have two options: keep going straight or turn left. If you turn left, you'll come across a small camp with a skullguard and an archer in it. A water skin and a copy of Great Spirits of the Reach: Volume 3 are beneath a wooden shelter on the right-hand side of the camp. A rack of meat is next to the tent.

If you head up the path leading west, you'll arrive at the top of the mountain, where you'll see the waterfall's source. A stone structure passes over the river. A long path leading north brings you to a ledge known as Bard's Leap Summit. If you jump from here, you'll receive an achievement. If you head south towards the Dragon Wall and the altar, you'll find the entrance to Lost Valley Barrow. Heading west brings you to the river's shore, and continuing along this path brings you to Blood-Hunter Hranach's tower. A thieves trove can spawn beneath the wooden ramp leading up the side of the tower, and a chest can spawn at the top of the ramp. A heavy sack can spawn beside the minotaur's bed, which consists of a pile of hay and a few blankets. A goat grazes on the hill west of the tower.

The barrow is swarming with Gray Host, and is only accessible during The Awakening Darkness. Skavengers and centipedes scuttle across the stone floor. The second room contains a ritual altar with a dead Ghostsong hunter upon it; sacrificed for a dark ritual.

This room lies at the end of the hallway south of the second room. Nathari is here, surrounded by the corpses of her clansmen. Arana identifies one of the corpses as Saagan. There are several urns in this room.

The lower barrow is just beyond the Chamber of the Dead. Hostile Ghostsong Clansmen are located here. Dead Ghostsong Clansmen and women are strewn across the barrow floor. Senan's Note is located next to the corpse of its author in the southern portion of the hallway. The door to the Dark Descent lies at the end of this hallway.

The nearby giant camp

Lost Valley Wayshrine is located northwest of Lost Valley Redoubt, across the river. Cicadas burrow next to the wayshrine, while goats and rabbits wander the slopes around it. A giant camp is located just down the hill east from the wayshrine. Two giants and a mammoth live here. A small Gray Host encampment lies southwest of the giant camp. An Icereach Coven standard has been erected here, which a chest can spawn next to. An Icereach Chillrender guards the place.

If you head down the main road east from the wayshrine, you may find a few objects of interest. The corpse of Kitza-Enoo is slumped against a tree where the road leads up a hill. Melina Cassel can spawn nearby as part of a Random Encounter.

There is one achievement associated with this location: